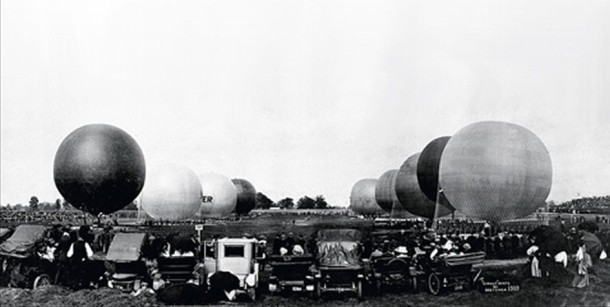 The nine balloons participating in the inaugural 1909 event at the motor speedway await takeoff amidst a crowd of over 40,000. (Image: Indiana State Museum)

Indy has been abuzz about aviation in the news this past week. First, the ultimately aborted downtown ‘buzz-by’ from a Boeing 747, which featured locally produced Rolls-Royce engines. Second, and perhaps the bigger news, was the announcement of a new event at The Indianapolis Motor Speedway. On October 1st and 2nd of 2016, IMS will feature a Red Bull Air Race. According to the Red Bull website, the air races began in 2003 and feature 14 pilots running elimination rounds, pairing the field down to a final four who compete for the podium.  Planes will take off from Hullman Boulevard, and speeds can be expected to top 265 miles per hour on the aerial racecourse. Although this latest test of man and machine will certainly be unique to the current generations of Indy residents, early Speedway history featured aviation spectacles prior to the creation of the 500 mile sweepstakes. 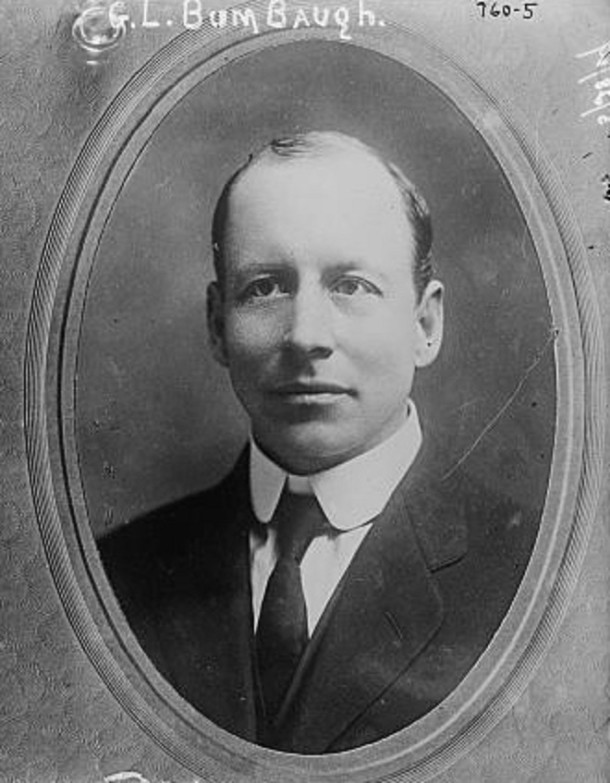 G.L. Bumbaugh was a pioneer in gas balloon aviation and served as a mentor and co-pilot to Carl Fisher. He aided in the design of the balloons that competed in the 1909 event (Courtesy Library of Congress)

The very first event at The Indianapolis Motor Speedway featured a championship balloon race. Carl Fisher, a track partner and aviation enthusiast, had become one of the few people to earn a pilot’s license. He created the Aero Club of Indiana to stage the event in conjunction with the Aero Club of America. The race featured nine entrants with the winner, The University City, landing some 400 miles away in Alabama. Fisher manned The Indiana along with mentor and aviation pioneer G. L. Bumbaugh. They encountered rapid and unpredictable ascents, taking the duo some 14,000 feet into the clouds. Flying closer to the ground proved no safer, as gunfire from farmers in rural Tennessee pierced the sky. Thankfully, their aim was off. Fisher and Bumbaugh decided to call it quits with their lives still intact at a farm near Tennessee City, Tennessee.

A view of the 1910 aviation meet. This had to be a dramatic scene to a crowd witnessing flight for the first time. (Image: Library of Congress)

June 1910 brought even more excitement at what was to become The Brickyard. An aviation meet featured Orville and Wilbur Wright, along with their ace flying team of six pilots. Orville Wright completed the inaugural “laps” around the speedway to the delight of the fans. The two-day event featured 35 rounds that tested endurance, altitude, and speed. The highlight proved to be a five-lap pursuit race featuring Wright pilots Arthur L. Welsh and Walter S. Bookings. 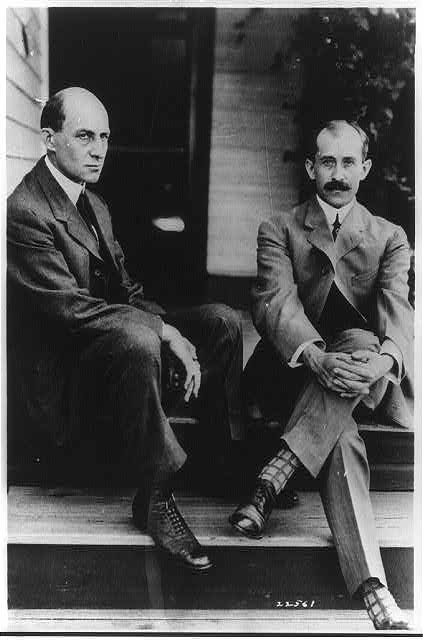 Wilbur and Orville Wright provided many of the planes and pilots used during the 1910 aviation meet. (Image: Library of Congress)

The novelty of the inaugural Red Bull Air Race is sure to bring a crowd to the Speedway. Much like the now defunct Indianapolis Red Bull Grand Prix, the event has deep ties to the early history of the track.  Do you plan to attend?