It’s the first week of March in Indiana. Snow covers the ground in what will hopefully be the last stand of winter. This also marks the beginning of the Indiana State Tournament in boy’s basketball. Over the coming weeks, fans will crowd gyms across the state in hopes of watching their team play for a title in Indianapolis. The tournament began in 1911 and helped coin the phrase “Hoosier Hysteria.” 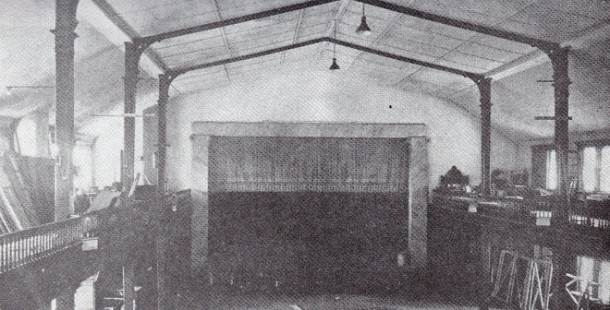 The first version of IU’s Assembly Hall was a bit cozier than today’s. It was also the site of the first State Tournament. The finals returned to Bloomington in 1972 and 1973. (Image: Indiana University)

For the first ten years of the state tournament, a champion was crowned in Bloomington, with the one exception of the 1919 finals played in West Lafayette. In a twist of irony,  those early years were dominated by schools from smaller communities. Multiple titles won by Lebanon, Franklin, Martinsville and Wingate proved the little guy could dominate his big city cousins. The finals came to the Indiana State Fairgrounds in Indianapolis in 1920 and remained there until Butler Fieldhouse (now Hinkle) was finished in 1928. The iconic building on the Butler University campus hosted the finals until 1971 (excluding the World War II years) and a legendary sectional until 1994. 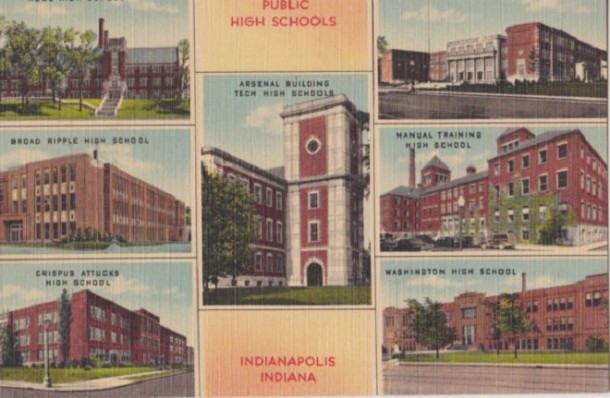 Perhaps a reason for the lack of state titles won by Indianapolis schools can be traced to the meat grinder of a sectional played each year at Butler. Up to sixteen teams from each public high school in Marion County would face off for the right to represent the city in the regional round. This required the eventual champion to play four games within only a couple of days.

A State Champion eluded the Circle City for the first forty-five years of the basketball tournament. That changed by the early 1950s with the dominance of the Crispus Attucks Tigers. Crispus Attucks High School’s creation came about in 1927 during a shameful era of racial segregation in Indianapolis Public Schools. The school was not allowed to participate as a member of the IHSAA until 1942 and saw little success trying to compete with few resources. That changed when Ray Crowe became head coach in 1951. Attucks dominated the 1950s, winning the massive Butler Sectional nine times in eleven years. They won the first State Title for the city in 1955 and followed it up by going undefeated in 1956 in another title campaign. The talent of players like Oscar Robinson and Willie Merriweather was embraced by the community, and even regular season games were moved to the Butler Fieldhouse to accommodate crowds in excess of 10,000. The Tigers won another title in 1959 under head coach Bill Garrett.

The team of the 1960s was the Washington Continentals. The 1965 team, featuring future Purdue and Pacers legend Billy Keller, defeated Fort Wayne North for a state title. Five years later the Continentals broke through again with future Hoosier and Pacer George McGinnis. They defeated Gary Tolleston in 1969. Broad Ripple capped of a 29-2 season in 1980 with a victory over New Albany. Throughout the Seventies and Eighties, power shifted as the North Central Conference schools and Marion County township schools became dominant. Sectionals were balanced, and what was left of the Butler spectacular moved to Lawrence North High School in 1994. Bloomington North won the last winner-take-all tournament in 1997. At this point teams became classified based on enrollment, forever ending the David versus Goliath match-ups that pitted neighboring communities against each other. While fan hysteria may be merely simmering, many talented players compete on the hardwood every night, including University of Kentucky Freshman Trey Lyles, who brought the Tech Titans their first title in 2014. 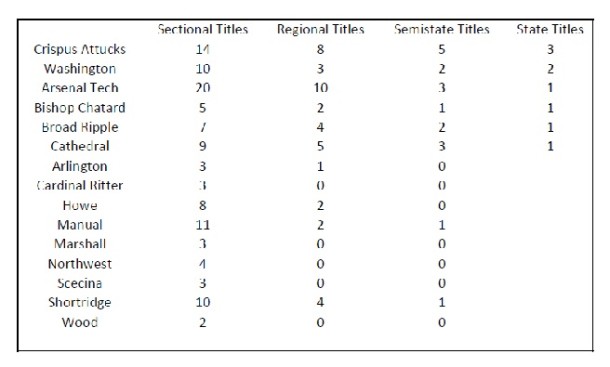 Bragging rights! A breakdown of the tournament success and futility of Indianapolis City Schools.

Many books have been written about the passion and talent that make Indiana High School basketball legendary. This short synopsis in no way is meant to cover all of the great moments.

What are some of your memories of Hoosier Hysteria throughout the years?