An unfortunate truth about downtown Indianapolis streetscapes is the “missing teeth” in what was once a picture-perfect urban smile. Suburbanization took its toll, particularly in the once-bustling retail districts. One stretch that remained noticeably neglected, even after the renaissance brought on by the opening of Circle Centre Mall, is the first block of East Washington Street.

Just over a decade ago, the block consisted primarily of empty storefronts, unused upper floors, and a sidewalk strewn with glass from window panes falling from the McQuat building. During those dark days, a demolition occurred that brought down a location which had been feeding hungry downtowners for more than a century. 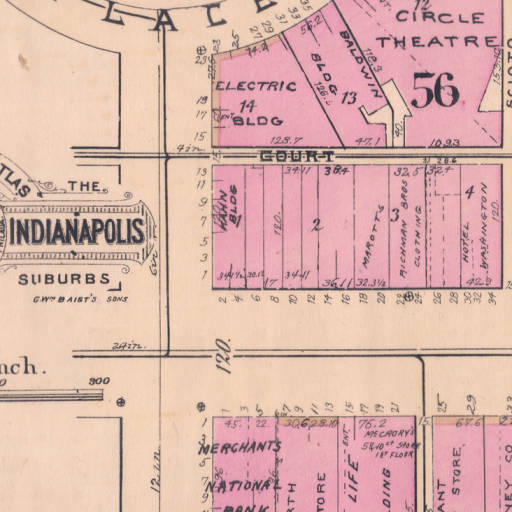 A 1929 Baist Atlas map showing the first block of East Washington. Much of this block remains the same today with the exception of the buildings at 6 and 8 E. Washington. (Image: IUPUI)

The building located at 6 East Washington Street had a unique street presence. Standing five stories tall, but only two bays wide, the Victorian Italianate structure could be described as a bit underweight. In 1898, a business moved in that proved popular for nearly 70 years. Craig’s Confectioner began doing business in 1873, in a four-story building at 20 East Washington Street, before moving down the block. Offering the finest products available, Craig’s gained a following that crossed state lines, on a par with famous candy makers of the day. The move further west down the block was precipitated by the construction of the Marrott’s Shoe Building (now part of Victoria Centre). The candy maker added “dainty lunches” to the board of fare, along with a soda fountain. Craig’s remained a popular destination for downtown shoppers and matinee attendees through the 1950’s, eventually adding locations at Glendale and Eastgate.

A 1907 image of Craig’s Confectionery. (Image: Hyman’s Handbook of Indianapolis)

By the mid-1960s, downtown retail and entertainment were losing steam. Craig’s sold its building to another Indy dining institution.

Burger Chef came about in 1957, as a way for brothers Frank and Donald Thomas to showcase their patented flame broiling mechanism. The experimental restaurant, located in front of Glendale, proved so successful that they soon franchised the restaurant, and Burger Chef became a national brand. In 1965, Burger Chef opened its 450th store in the former Craig’s location, hoping to capture the downtown lunch crowd. The building, now stripped of its ornamentation, was clad in bright, cartoonish porcelain panels. The restaurant was distinguished from others in the chain with the long and narrow expanse. Customers put their trays on a conveyor belt and were served cafeteria style. Those with take-out orders were whisked out the back door into the alley. The concept proved successful over the next fifteen years. 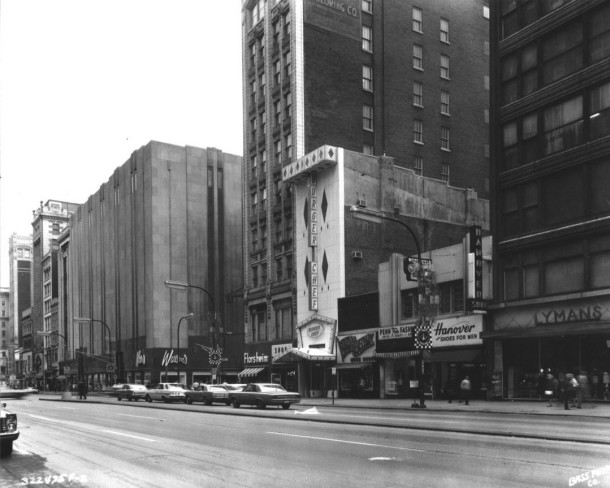 Change again came in 1982. Burger Chef was sold off by then parent company, General Foods, to a Canadian firm which owned the rights to Hardee’s. Slowly but surely, every remaining Burger Chef was re-branded or closed; the last holdout shuttered in 1996. Indy’s “go-to” fast food outlet became a memory.

The downtown location survived the Hardee’s conversion, expanding to the east. However, the building’s colorful paneling was removed, exposing the blocked-in windows to the world. Hardee’s began to struggle in the mid-90s and was eventually sold to Carl’s Jr. in 1997. That is when the downtown store closed for good. The building stood vacant and deteriorating until 2002, when it met the wrecking ball. After more than a decade, the vacant lot was filled in with a new mixed use building. Keeping true to its earlier retail story, you can grab a quick bite on this Washington Street parcel now featuring another brand of fast food. 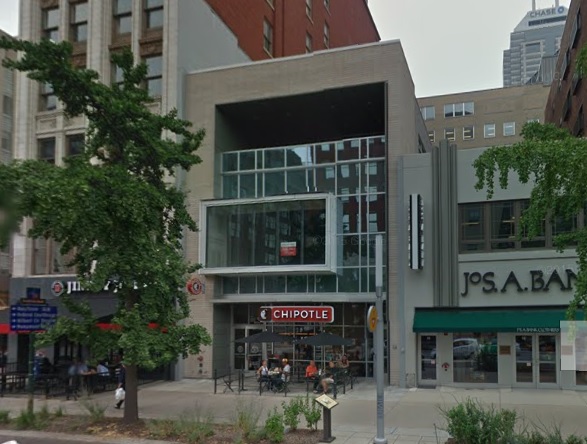 The new building at 6 East Washington. Notice the grey outline on the King Cole building showing the roof line of the demolished Craig’s. As you can see, retail is picking up on the this once forlorn street.