It’s easy to pick out an out-of-towner at the grocery store on a Sunday. Often times he or she will walk confidently up to the cash register holding a six-pack of beer or a bottle of wine, only to be turned away due to Indiana’s Blue Laws. It’s a list of common complaints among visitors: the hassle of not being able to buy cold beer at a grocery, not being able to bring your children into a bar, and the dreaded no Sunday sales. Things always could be worse. When looking at the history of liquor regulations in Indy, Big Brother isn’t paying nearly as much attention as he used to. 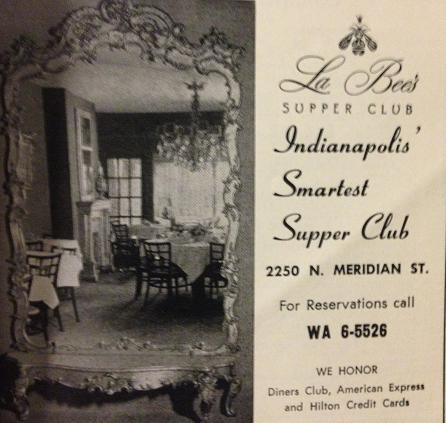 La Bee’s was one of the many nightspots that lined Meridian. Today it’s nothing more than parking for a neighboring building. (Image: Indiana State Library)

Alcohol regulations were around long before Indiana was even a state. Back in 1805, the Indiana Territory began requiring a liquor license for any tavern, at a cost of twelve dollars. This was hardly oppressive to the tavern owner; the only stipulation was that “innkeepers furnish good entertainment and accommodations for man and horse.” Everything else was fair game, as long as nobody sold alcohol to an Indian within 30 miles of the territorial capitol of Vincennes.

What’s the word? The Thunderbird has recently returned to its former location in Fountain Square. It was known for its rock-a-billy acts in the late 50’s. (Image: Indiana State Library)

By the time statehood came around in 1816, a whole new set of restrictions was enlisted to purveyors of spirits. Sunday sales were prohibited. A $500.00 charge was set for liquor licenses and sales to minors, and intoxicated people were banned. This held on throughout the nineteenth century, but change was brewing. In 1872, the Indiana Prohibition Party was formed, and the temperance movement was in full swing. By 1917, 33 Indiana Counties were dry, and the following year statewide prohibition went into effect.

Life has been quite hum-drum at Jackie’s. The site became an International House of Pancakes and home to a CVS. (Image: Indiana State Library)

By 1933, hurting Hoosiers had finally had enough.  In a statewide referendum to repeal, the vote was 554,129 to 311. Booze was back, although heavily regulated. Here is a listing of some of the more ridiculous laws, and the year they were repealed.

The next time a visitor gives you grief because they can’t have a Sunday six-pack, remind them that it could be worse. Direct them to the nearest micro-brewery, where you may actually buy some beer and take to the tailgate. What are some of the more ridiculous Indiana Laws that you remember and where were some of your favorite places to wash away their memory? 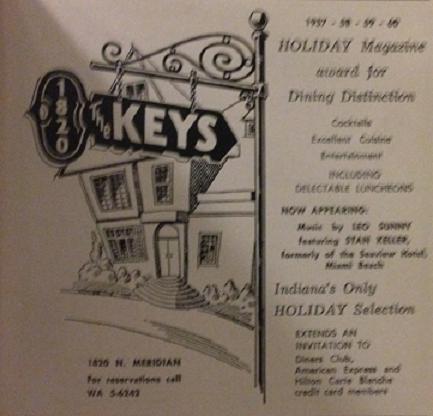 The Keys was a popular piano bar on the strip along North Meridian Street. (Image: Indiana State Library)