Memorial Day weekend brings about another exciting edition of “The Greatest Spectacle in Racing.” The ninety-ninth running of The Indianapolis 500 has many exciting story lines to follow. Can Ryan Hunter-Reay become the first repeat winner in over a decade? Can Helio Castroneves dance his way into the winner’s circle to become a four-time winner? Throughout the weekend, many debates around bar stools and campfires will occur amongst veteran speed enthusiasts on who was the greatest to ever tame The Brickyard. A sure front-runner in these conversations tragically lost his life some sixty years ago, while trying to win his third 500 in a row.

The story of Bill Vukovich is a perfect definition of an Indy hero. Born in Fresno, California in 1918, Vukovich earned the nicknames “the mad Russian” and “Silent Serb” due to his Serbian background, although press interviews show Vukovich never seemed to be short on words. Vukovich started his racing career in midget cars, becoming the champion of that division in 1950. He would spend the rest of his days racing in the Indianapolis 500. By his second attempt in 1952 “Vuky” led the race before crashing. 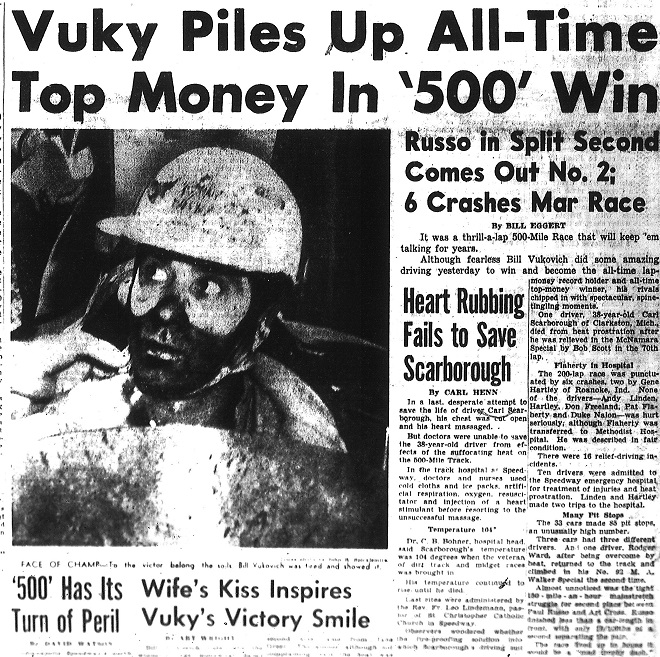 Vukovich came back in 1953 and dominated the month of May, winning the pole, leading 195 of the 200 laps and turning the fastest lap prior to claiming victory. This is known as the hottest race to be ran with track temperatures approaching 160 degrees. Vukovich was one of only five drivers to complete the race without the aid of a relief driver. 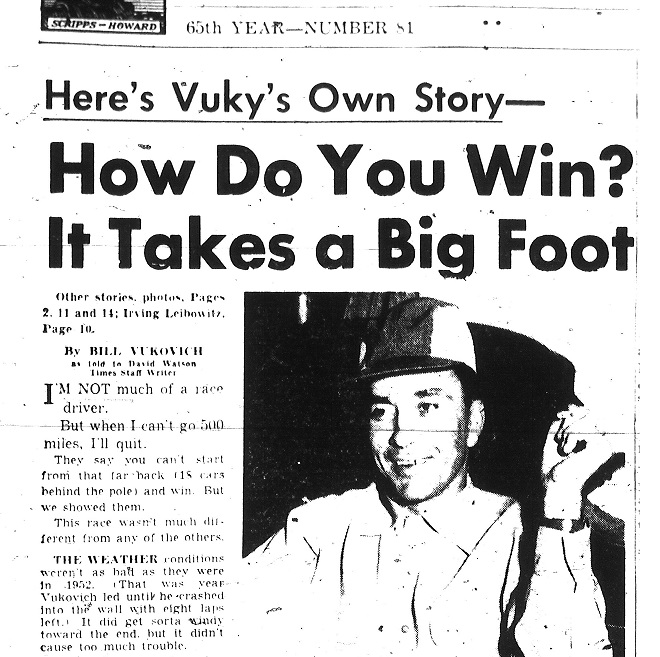 A happy and confident Vukovich decided to pen his own article in the June 1st edition of The Indianapolis Times after winning his second straight 500. (Image: Indiana State Library)

In 1954 Vukovich returned to the speedway to defend his title. The number fourteen car did not dominate qualifications like the prior year and started way back in the fifth row. Race day proved a different story. Vukovich lead ninety laps before winning his second straight. He was clearly exhausted after averaging a pace of 130.84 miles per hour and even lost hearing for nearly one hour. The following day Vukovich sang a more confident tune even composing his own recap in The Indianapolis Times. Vukovich proclaimed that “it wasn’t as tough as last year.” His racing strategy seems rather simplistic as he stated “you get in there, put your foot on it and make it go ‘till it explodes.” 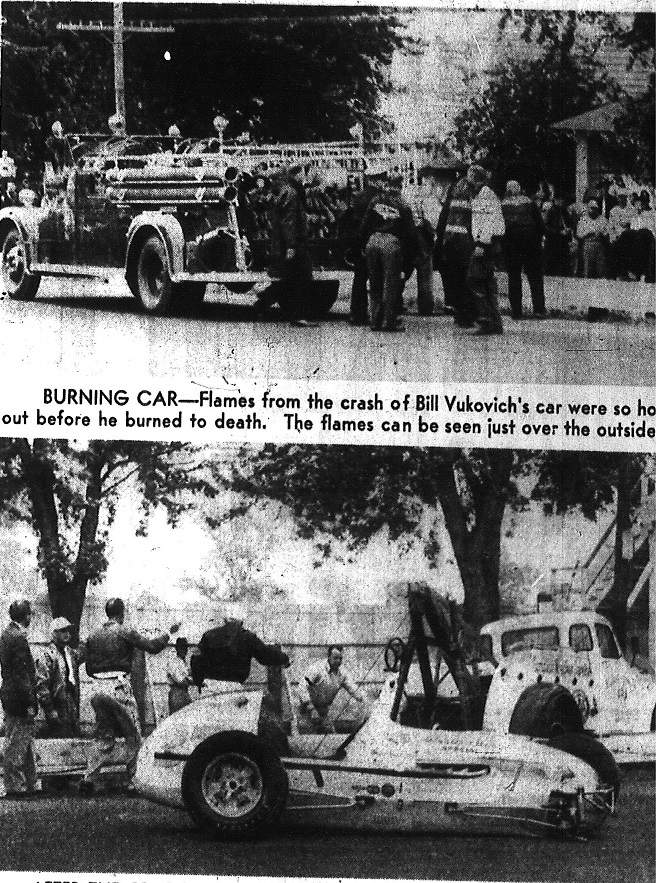 The aftermath of the fatal crash that took the life of Bill Vukovich in during the 1955 500. (Image: Indiana State Library)

During the 1955 Indianapolis 500, Vukovitch held a 17-second lead at the 57th lap. As Vukovich exited turn two and headed into the backstretch, he came upon slower traffic. The car of Roger Ward experienced a mechanical failure, creating mayhem directly in front of the race leader. Johnny Boyd attempted to avoid Ward, passing the disabled car on the inside. Al Keller panicked and locked his brakes, striking Boyd and placing him directly in the path of Vukovich. Car 14 of Vukovich struck Boyd, sending him airborne over the outside wall entering turn three, landing upside down and bursting into flames. Vukovitch fractured his skull on impact, killing him instantly and ending the dream of winning three straight 500’s. This crash, along with the Le Mans disaster in June, sparked a fierce debate over the merits of racing. Fortunately advances in safety, such as catch fencing, have prevented numerous similar tragedies. Let’s hope the 99th edition of the Indy 500 proves safe and entertaining for all participants and spectators.