In 1905, philosopher George Santayana penned the oft-repeated maxim, “Those who cannot remember the past are condemned to repeat it.” To which Indy native Kurt Vonnegut promptly retorted (some 80 years later), “I’ve got news for Mr. Santayana: we’re doomed to repeat the past no matter what. That’s what it is to be alive.”

As Indianapolis approaches its bicentennial, you’ll read a lot of articles about how much the city has changed over the past two centuries. This isn’t one of those articles. Today — and on future Deja Vu Tuesdays — we’re going to celebrate 200 years of history repeating itself.

For example, the public outcry surrounding the Nora Post Office’s recent decision to banish a blind broom seller from its premises has echoes of an unfortunate incident from a century ago involving “Shoestring George” Johnson, an elderly blind man who made a living peddling shoelaces.

In 1916, local business leaders and elected officials successfully rallied to support Johnson after he was convicted for a crime that many believed he did not commit.

Johnson was a familiar fixture in downtown Indianapolis in the early years of the last century, selling shoestrings from a cart that was catty-corner to the Courthouse.

He first captured the public’s attention in 1907, when The Indianapolis Star published the sad tale of how he had been swindled out of his hard-earned money by an unfamiliar man and a woman who he later described as a “high-stepping North Side heifer.”

As Johnson related the tale, a man whose voice he did not recognize gave him what he claimed was a $2 bill for $1 pair of shoelaces.  Johnson later discovered that the currency in question was a $1 bill, and that he had been defrauded.

Even more egregious, however, was an incident involving a woman described by onlookers as “good appearing.” Although she was not a regular customer, she talked like she was “somebody,” according to Johnson, so he took her word for it when he gave her change for what she said was a $5 bill.  Within minutes of the transaction, however, Johnson learned that he had been cheated out of $4.

Following these incidents, Johnson declared that he would accept no currency larger than a $1 bill.  As to whether he might be deceived by counterfeit coins, however, the shoestring peddler conceded that in most of his transactions, he had to “trust largely to a hope that there were not many people in the world” who would swindle a blind man out of his hard-earned cash.

The Star dubbed the individuals who had stolen from Johnson “the meanest man and meanest woman in Indianapolis.”  The story went viral, at least by 1907 standards, and was picked up by other newspapers, including The Fort Wayne Daily News. 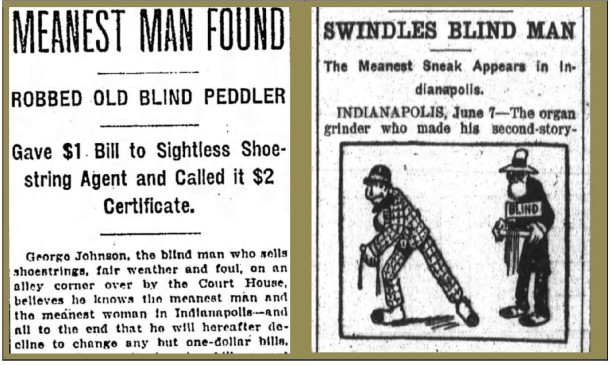 As a result of his prime location across from the Marion County Courthouse,  Shoestring George Johnson gained many friends and supporters over the years among the city’s business, civic and political leaders.  One particular benefactor was hardware store owner Franklin Vonnegut, who was one of the three trustees selected in 1913 to distribute lots to subscribers of the proposed Mars Hill industrial community.

A southwestside suburb near Holt Road and Kentucky Avenue, Mars Hill was established in 1911 by a consortium of Indianapolis businessmen who hoped to turn the former farmland into a thriving industrial community with factories and 50,000 residents.  Although the plan was never fully realized after the sale of lots fell far short of its 8,000 goal, in May 1913 the 1,100+ subscribers who paid $400 each for 2,000 lots would finally get title to their property in a random drawing at the Chamber of Commerce offices. 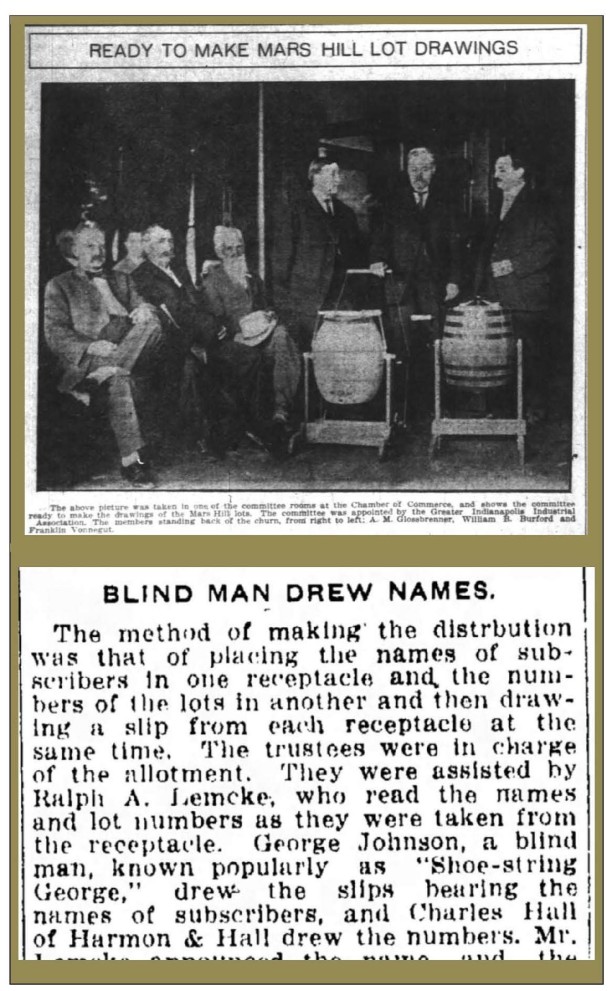 Three years later, Vonnegut and other local leaders who had befriended Johnson would stand behind him after he was convicted for a crime that many believed he did not commit.

In June 1915, Johnson was fined $500 and sentenced to six months in the state penal farm after he was convicted of contributing to the delinquency of a girl.  Vonnegut filed a petition for clemency with Governor Samuel Ralston, noting that even the girl’s father believed that Johnson was innocent.  Similar petitions calling for remission of the hefty fine were filed by the county clerk, the county treasurer, the county auditor, and even the county sheriff.

Although it appears that Johnson served some time at the state penal farm, the $500 fine was lifted by Governor Ralston and Johnson returned to his shoestring stand across from the courthouse. 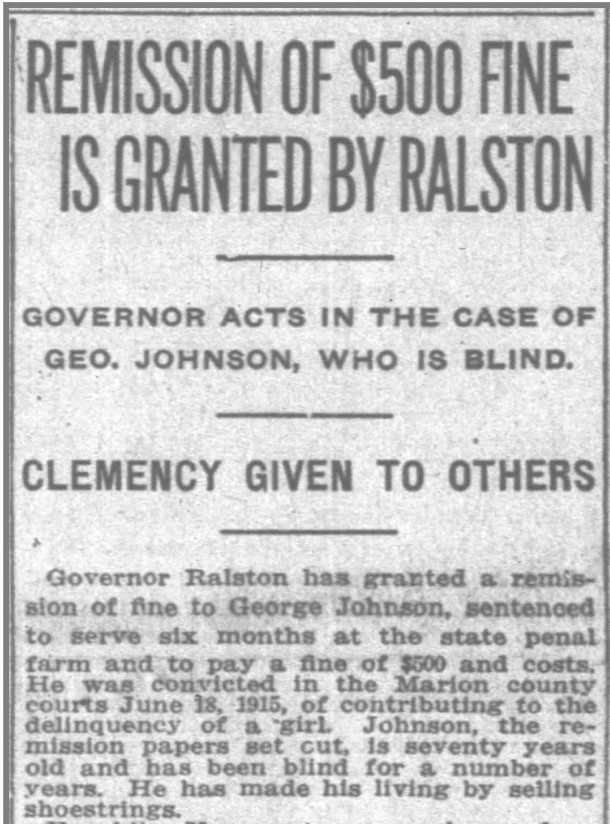 Fast forward another three years, and Johnson was back in the newspapers again over a $500 payment — but this time for a happier reason.  In the spring of 1919, the U.S. government launched a final round of bonds to help pay for the cost of victory in World War I.  The Indianapolis campaign was dubbed, “Mop Up,” and urged local residents to “show their gratitude for victory” by subscribing to their limits.  Funds raised would be used “to mop up the debris of war — to bring the boys home — to care for the maimed, the blind — the widows and orphans.”

Shoestring George rose to the occasion. The blind peddler who stood on a street corner selling shoestrings by the pair — day after day, year after year, rain or shine — bought $500 worth of Victory Loan bonds. 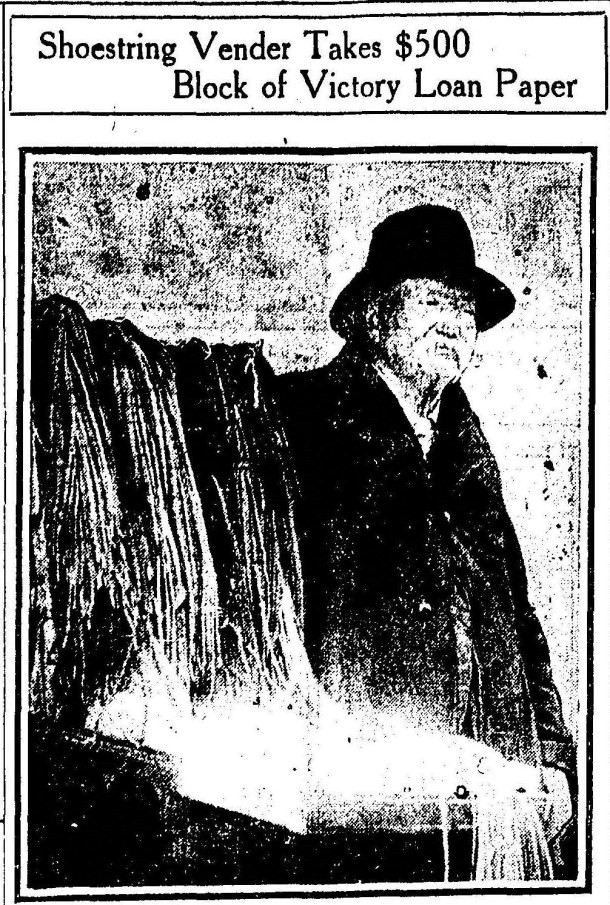 Although little is known of Johnson’s personal life, The Indianapolis Star reported in November 1919 that Johnson had been injured in a fall down a flight of stairs on North Delaware street. A trap door to a basement stairwell had been left open on the sidewalk, and Johnson stumbled inside.  The elderly man suffered some minor scrapes and bruises which were treated by police. According to the Star, Johnson was then escorted back to his room at 120 East Washington, in the hardware store building owned by his longtime friend and benefactor, Franklin Vonnegut. 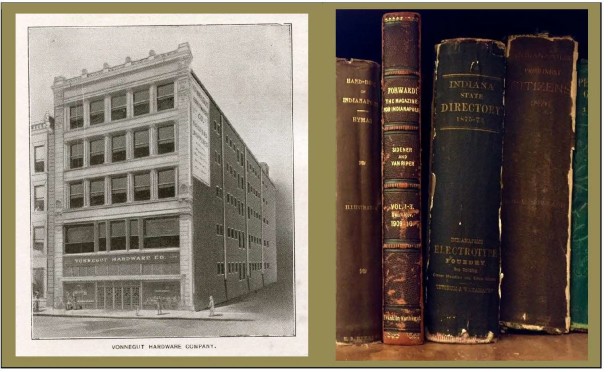 Photo (left) from The Journal Hand Book of Indianapolis, 1903. The books on the right were purchased at auction and include Franklin Vonnegut’s bound copy of “Onward,” a monthly magazine published in the early 1900s by the Commercial Club of Indianapolis.