1856 daguerreotype of Calvin and Keziah Fletcher. This is the only known image of Fletcher’s second wife. Note that the brass mat is embossed in the corners “W. H. Weeks” and “Indianapolis.” Click for larger image. (Indiana Historical Society, P120 Fletcher)

This well-executed daguerreotype portrait, made at Weeks’ Daguerrean Gallery in College Hall in 1856, shows the prolific diarist Calvin Fletcher (1798-1866) and his second wife, Keziah Price (Backus) Lister (1813-1899). It is one of the gems of early Indianapolis photography and is preserved at the Indiana Historical Society.

The industrious Fletcher, who settled in Indianapolis in 1821, seems almost superhuman from his diaries which document his every move beginning in 1817, recording his arrival in Indianapolis as a young lawyer in 1821, the growth of his large family, and his business and farming  ventures until his death in 1866 due to complications after a fall off his horse. Although an attorney by trade, he was involved in banking, railroads, farming, religious activities, and numerous committees and charities. Sarah Hill, his first wife and mother of their eleven children, died in 1854 and Fletcher remarried Mrs. Lister, their mutual friend and children’s teacher. Lister, who had been abandoned by her physician husband, was accomplished in her own right and had been principal of the female department of the Indianapolis High School. Much to the consternation of some of his children, the couple married on November 4, 1855 after a half-year effort to finalize Mrs. Lister’s divorce.

The daguerreotype gallery of William H. Weeks was located on the third floor of College Hall. Typical of studios of the era, it was located on the top floor and had a large skylight for portraits. (South side of E. Washington Street between Pennsylvania and Meridian Street from the 1854 color lithograph “View of Indianapolis” by James T. Palmatary)

The older newlyweds had been married just two months when they visited the daguerreotype gallery of William H. Weeks in College Hall, a three-story brick structure built in about 1847 by Daniel Yandes and Thomas H. Sharpe on the southwest corner of E. Washington and N. Pennsylvania Street. The seriousness seen in their faces is not a reflection of their moods, but is typical for portraiture before snapshot photography became popular in the late 1880s. Modeled after the poses and expressions seen in oil paintings and miniatures on ivory, the progenitors to photographic portraits, daguerreotypists instructed sitters to look pleasant or relaxed, but people certainly did not want to smile and look giddy for prosperity.

Fletcher recorded in his diary on January 10, 1856:  “Mrs. F. & I visited the daguerrean office & are to have ours taken.” The next day, after stating that the temperature was ten degrees below zero, he wrote:  “Mrs. F. & myself to visit State fair & had our Daugrtypes taken by Dr. Weeks on one plate  Mrs. F. in her winter travelling dress & myself in overcoat as it was a cold day.” The “State fair” comment is misleading as the fair was held several months earlier in October. Weeks’ daguerreotypes won prizes at the 1855 fair, a fact that he often mentioned in his newspaper ads. Perhaps Weeks displayed a sign promoting his State Fair prize and Fletcher confused it with the gallery name.

Being wealthy, Fletcher could afford the larger half-plate (4.25 x 5.5 in.) daguerreotype, which is a one-of-a-kind, direct positive image made on a copper plate coated with a highly polished layer of silver and fumed with iodine and mercury. He recorded in his expense book that he paid five dollars for the framed image, at a time when one dollar was the norm. This scan does not show the decorative thermoplastic wall frame that, along with the larger size, explained the higher cost.

Daguerreotypist William Holland Weeks (1822-1888) arrived in Indianapolis from Cincinnati in 1855 and with a partner purchased the Metropolitan Daguerrean Gallery which had occupied College Hall since 1851. Advertisements in 1855 noted that the business made daguerreotypes, copied paintings, and offered “likenesses of the dead taken on short notice.” Weeks stayed there less than two years, but repurchased the gallery again in 1859 with a new partner, this time specializing in the newer paper photographs and several other processes. Although the daguerreotype was being replaced by ambrotypes, tintypes, and albumen paper photographs by the late 1850s, an advertisement in the 1862 Indianapolis city directory stated that theirs was “the only gallery where the genuine daguerreotype is made.” Weeks was one of the few Indiana daguerreotypists to mark his work by stamping his name on the brass mat. Within a couple of years he left the photography business to open a grocery store, remaining in Indianapolis until his death in 1886. The gallery changed hands frequently until at least 1875, after serving as the city’s premier photograph gallery for twenty-five years. 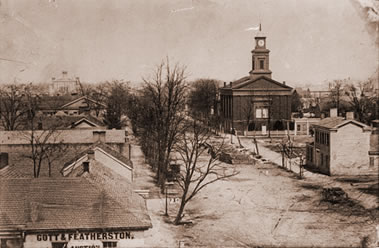 Photographers occasionally leaned out the studio’s upper-floor windows to make street views, including (top) this circa 1857 daguerreotype or ambrotype looking north toward Roberts Chapel on Pennsylvania Street and (bottom) Salter and Judd’s 1874 stereoview looking east toward the Odd Fellows lodge. 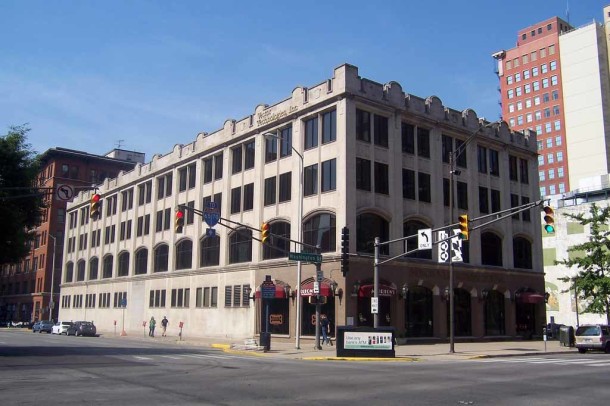 The S. S. Kresge Company built the current structure on the old College Hall site in 1923 and occupied the building until moving to W. Washington Street in 1947. Later the building housed the William H. Block Company’s budget store. Today the prominent corner is best known as the home of the Indianapolis Business Journal and Morton’s Steakhouse.

Too much of our early photographic history is lost or still hidden in attics and basements. Do you have old Indianapolis daguerreotypes, ambrotypes, or stereoviews? Are you related to early Indiana photographers? Please share your photographs and stories with the Indiana Album, a bicentennial project to scan and catalog historic photographs throughout the state. Contact info@indianaalbum.com for details.

Calvin Fletcher’s papers are archived at the Indiana Historical Society, which has published a nine-volume set of his diaries (1817-1866). http://www.indianahistory.org/library/manuscripts/collection_guides/M0108.html