Cabinet card looking south on Alabama Street, October 21, 1892. The house-like float is on Massachusetts Avenue and Vermont Street runs east and west at this intersection. (Courtesy of the Indiana Album: Loaned by Joan Hostetler)

This unidentified image by photographer Kreitlein appeared on eBay recently and luckily clues within helped pinpoint the location to the intersection of Alabama and Vermont Streets and Massachusetts Avenue. Playing photo sleuth we were even able to determine that the event was the Columbus Day parade held on the afternoon of Friday, October 21, 1892.

Photographs can usually be dated within a five-year span based on the photographic process and format, internal clues such as clothing and buildings, the name of the photographer, and written captions. This one has no writing on the back, so we had to rely on the other details to solve the mystery.

Cabinet cards, consisting of a photographic print pasted onto a 6 1/2″ x 4 1/4″ card stock mount, were most popular between 1870 and 1900. The style of the mount, with the decorative line above the photographer’s imprint and the scalloped edges, indicates that it is probably from 1888-1895. Cabinet cards were primarily used for studio portraits, so this street scene is quite rare. The photographic process is a glossy gelatin or collodion printing-out paper, narrowing the date to the late 1880s or 1890s. The photographer “Kreitlein” of 113 Mass Ave (changed to 409 Massachusetts Avenue after the city’s 1897 renumbering project) refers to brothers Charles and John Kreitlein, who worked at that address between 1892 and 1895. 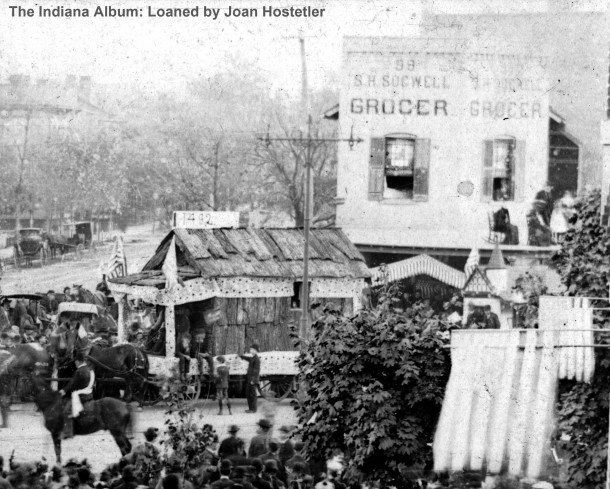 Detail of float and grocery (Courtesy of the Indiana Album: Loaned by Joan Hostetler)

Zooming in on the upper right section and burning in the details with Photoshop brings out the lettering “99 S. H. SOCWELL GROCER” on the two-story store. City directories show that Samuel H. Socwell operated a grocery store at 99 Massachusetts Avenue on the southwest point of Massachusetts Avenue and Alabama Street (currently about 371 Massachusetts Avenue). Socwell and his family lived above the store and you can see women and children are standing and seated in a rocking chair watching the festivities from the porch roof.

The sign “1492” on the roof of the float proved to be the most revealing clue to determine the date. Of course 1492 was the year that Christopher Columbus set sail for the new world. The so-called discovery of America was celebrated in the United States as early as 1792 and sporadically in larger cities with Italian-American residents. In 1892 President Benjamin Harrison proclaimed “I Benjamin Harrison, President of the United States of America . . . do hereby appoint Friday, Oct. 21, 1892, the four hundredth anniversary of the discovery of America by Columbus, as a general holiday for the people of the United States.  On that day let the people so far as possible cease from toil and devote themselves to such exercises as may best express honor to the discoverer and their appreciation of the great achievements of the four completed centuries of American life. . . . Let the national flag float over every schoolhouse in the country and the exercises be such as shall impress upon our youth the patriotic duties of American citizenship. In the churches and in the other places of assembly of the people, let there be expressions of gratitude to Divine Providence for the devout faith of the discoverer, and for the Divine care and guidance which has directed our history and so abundantly blessed our people.”

More recently historians have questioned the motivations of Harrison, who was campaigning for his second-term reelection during the summer of 1892. Due to his wife Caroline’s tuberculosis diagnosis, Harrison led a rather lackluster campaign. Could the celebration of Columbus, a Catholic Italian, bring in the votes of Catholic immigrants that Harrison needed in his tight race against Democrat Grover Cleveland? Harrison went on to lose the election, just two weeks after his wife’s death.

Regardless of Harrison’s motives, the public embraced the national holiday and Indianapolis was no exception. Businessman John T. Brush (who owned the When Clothing Store) chaired the Indianapolis Columbus Day Celebration planning committee. The 30-hour celebration began on Thursday, October 20 when German veterans fired a cannon on the courthouse grounds. Historic and literary pageants were held at Tomlinson Hall and businesses and residents decorated with flags, bunting, and lanterns. Cannons, factory whistles, and church bells began the day on Friday and schoolchildren held commemorative exercises at their schools, reciting the Pledge of Allegiance for the first time. The highlight of the day was the afternoon parade with dozens or ornate floats and marching units. An article in the Indianapolis News described each float in detail, including the one pictured: “A bark house, dated 1492, followed by a handsome complete frame house, led the German Carpenters’ Union. A small boy sat on the portico of the small house in a homelike manner.”

The photograph was taken from the front steps of the double house of contractor Wilmer F. Christian  on the northwest corner of Alabama and Vermont Streets. Read more about Christian and his house in last week’s Indianapolis Then and Now column. 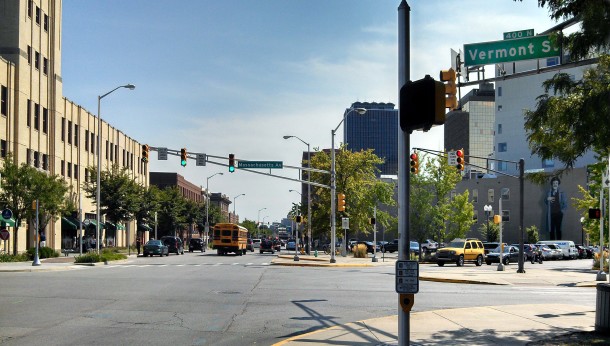 Today the two-story tall Kurt Vonnegut mural and “Ann Dancing” sculpture (out of view to the left) watch over this intersection. The houses on Alabama Street were replaced by the Art Deco Sears Roebuck and Company building in 1929. Currently it houses offices and a Marsh grocery (still fondly remembered as O’Malia’s). The Socwell Grocery building was demolished in the 1970s and that site is now a parking lot. Wilmer and Maggie Christian’s house to the right was razed in about 1930 to make way for the Sears Automobile Service garage. Today it is a parking lot for Roberts Park Methodist Church.

Columbus Day, celebrated continuously as a federal holiday since 1934, has transformed as well.  Due to the explorer’s poor treatment and enslavement of indigenous people, the spread of disease killing thousands of Native Americans, and forced Christianity, many question the validity of honoring Christopher Columbus as a hero. Several states and cities have renamed the day Indigenous People Day or Discovery Day. 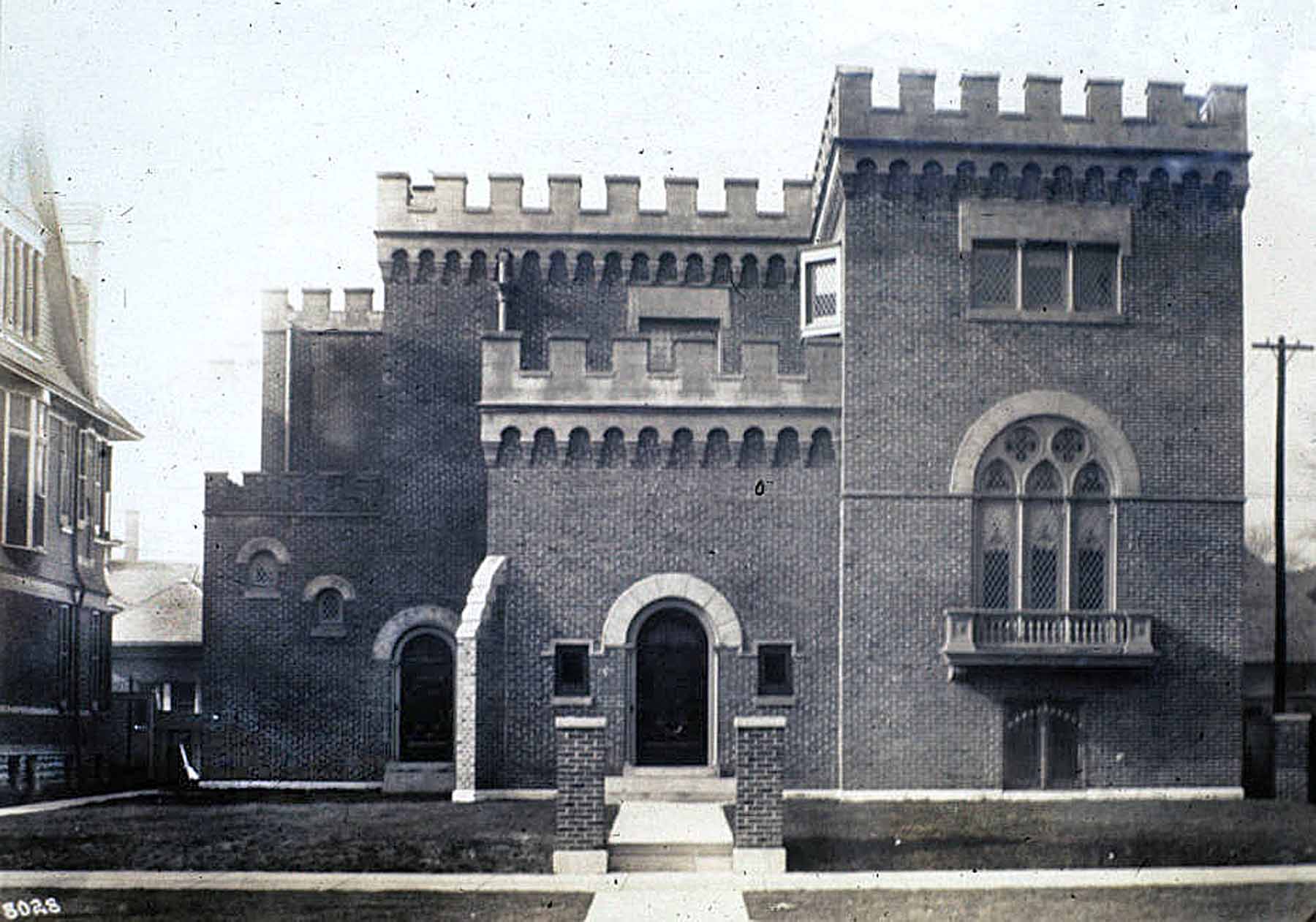 Indianapolis Then and Now: The Reid-Dickson House, 1456 N. Delaware Street