The Fountain Block Building at the intersection of Virginia Avenue and Prospect and Shelby Streets in Fountain Square was constructed in 1902 with stores on the first floor, offices and apartments upstairs, and a grand hall on the upper level. When photographed in 1927, the first floor housed Sablosky’s Department Store owned by William S. Sablosky. Sablosky’s father Michael and uncle Isaac immigrated to the United States from Russia in the 1880s and owned several dry goods stores in Indianapolis. The two-story brick Italianate building seen to the right was home to a restaurant listed as Herman Kearney’s Cafeteria in the 1927 city directory. 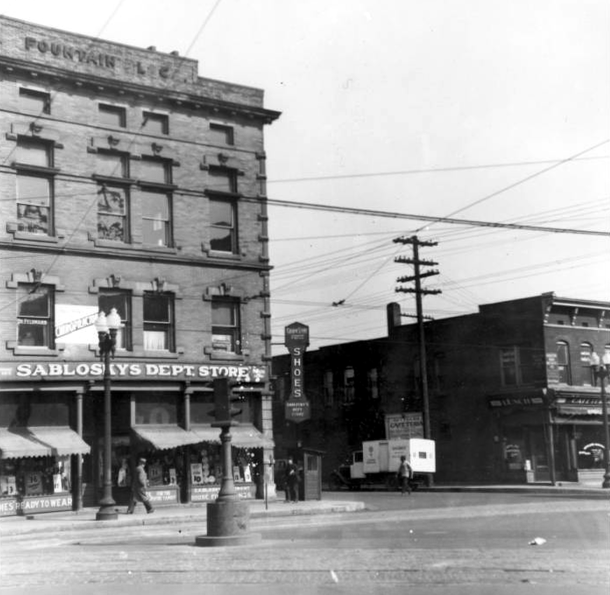 When rephotographed eight years later by Indianapolis Power and Light, we note several subtle changes including the removal of the large electrical poles and dozens of wires, and the loss of a couple more letters from the Fountain Block sign. A small wooden shed went up on the corner in front of Sablosky’s…any guesses about its use? 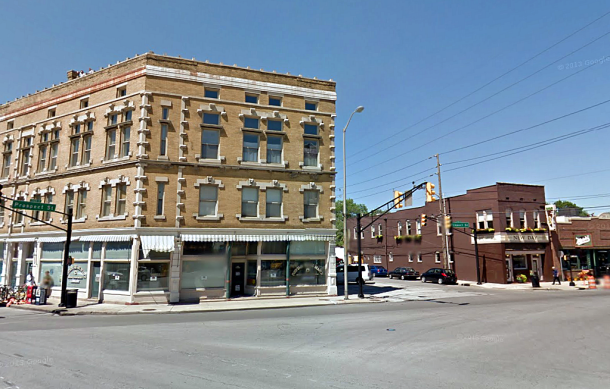 In 1994 the Fountain Block was rehabbed to its current configuration and today houses the Fountain Square Branch of the Indianapolis Public Library and Fountain View Senior Apartments. Although the old restaurant looks a little naked without its cornice and decorative brackets, it still stands and today houses the tasting room and gallery of New Day Meadery, makers of handcrafted honey wines and cider