With three operating traditional diners and the recent explosion of food trucks zipping around town, Indianapolis is enjoying a diner revival with a nostalgic cult following among roadside architecture fans. Purists define a diner as a prefabricated building constructed specifically as a restaurant. Others broaden the definition to include old trolley and railroad cars later converted into restaurants (such as the Barge Fish ‘n Chips). The mobile restaurants have roots dating to the 1870s, when horse-drawn lunch wagons provided meals near factories. The later prefabricated diners usually remained stationary and were placed on foundations, but it wasn’t unheard of to move them to a better location.

The Meadowbrook Diner at 5151 East 38th Street is one of several authentic diners that once fed the hungry masses in Indianapolis. Located just east of N. Emerson Avenue, this diner has served customers for sixty years. In the early 1950s, experienced diner owners James and Ted Bellas of Long Island dreamed of opening a diner in Ohio or Indiana, but figured it would be too complicated and expensive to ship the diner from the manufacturer, Mountain View Diners in Signac, New Jersey, to the Midwest. But a company salesman made the process easy and even located four possible sites for a diner in Indianapolis. The Bellas brothers liked the 38th Street location and, although nervous about the cost, approved drawing up blueprints. They wanted a diner large enough for booths as well as counter service, so the company provided them with plans for a 65′ x 33′ deluxe diner. Mountain View built it in three, eleven-foot sections, plus a large vestibule–all of which were shipped in February of 1954 by railroad flat cars to an Indianapolis freight yard and trucked to the 38th Street site, where local contractors hired by the manufacturer were ready to piece it together on the new foundation. 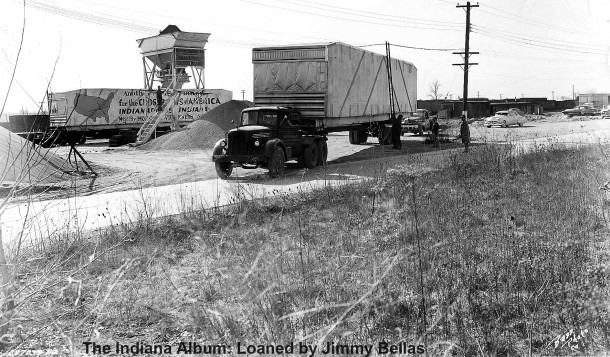 The diner came by rail from New Jersey and was then hauled by several trucks to 5151 E. 38th Street. (The Indiana Album: Loaned by Jimmy Bellas, photo by Bass Photo Company)

A sign on the side of the diner reads “Another Modern Diner for the Crossroads of America, Indianapolis, Indiana, Mfdg. By Mountain View Diners, Signac, N. J.” 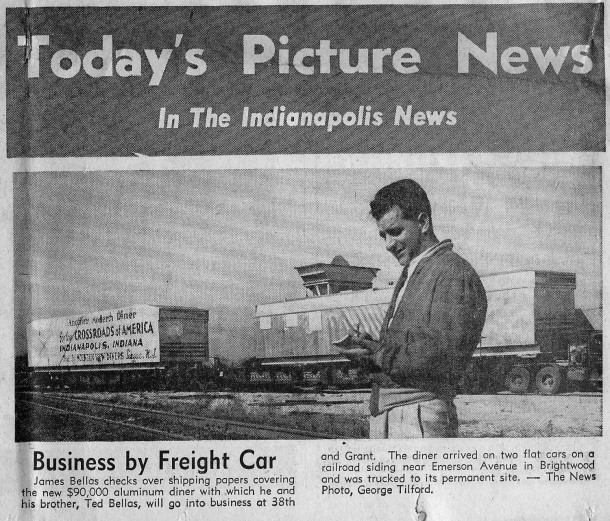 Although this Indianapolis News article states that the diner cost $90,000, an article written by the owner in late 1954 states that in total it cost almost $200,000. 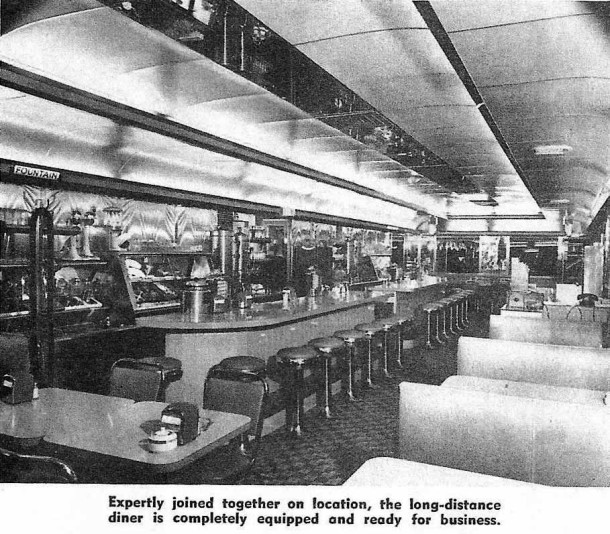 From Diner, Drive-In and Restaurant, A Magazine of Counter and Car Service, November 1954, p. 14

Diners were said to come with everything but the customers, and the Meadowbrook arrived with tile floors, stainless steel backsplashes, a vaulted ceiling, a soda fountain, booths, stools at a long counter, kitchen equipment and appliances, and even dishes and pots and pans. 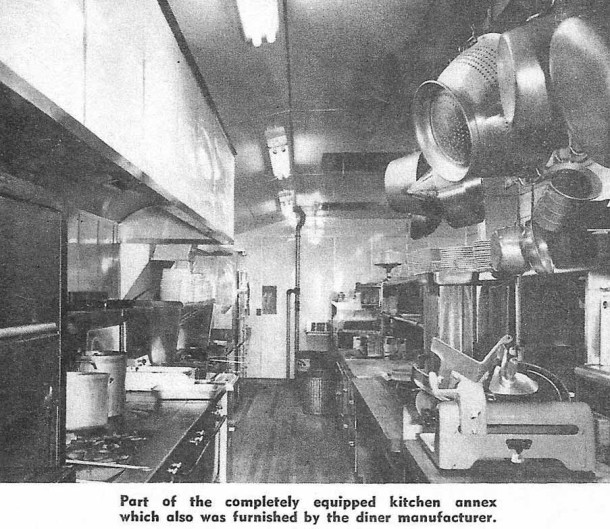 From Diner, Drive-In and Restaurant, A Magazine of Counter and Car Service, November 1954, p. 14 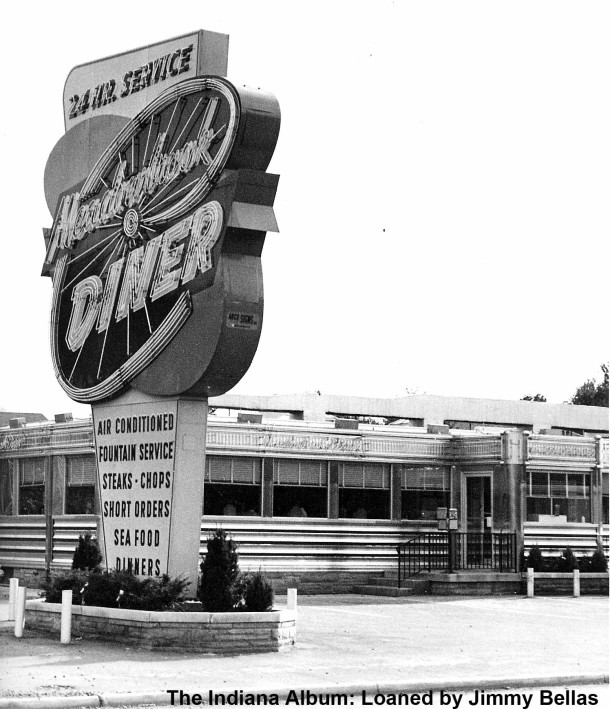 According to the sign, the diner had fountain services, air conditioning, twenty-four hour service, and an extensive menu that included short orders, steaks, and seafood dinners. Jimmy Bellas, son of original owner James Bellas, recalled that the sign was very expensive. It featured multi-fluorescent colors with timed “chasing” lights with a burst of color emitting from the center.

This vintage film of the Meadowbrook Diner, posted on YouTube by MyFootage, begins with a car pulling up to the diner from 38th Street in the late 1950s. [It appears that the last part of the film, showing a carhop delivering food to a couple in a car, depicts another restaurant since the Meadowbrook didn’t have a roof overhang or glass walls.] 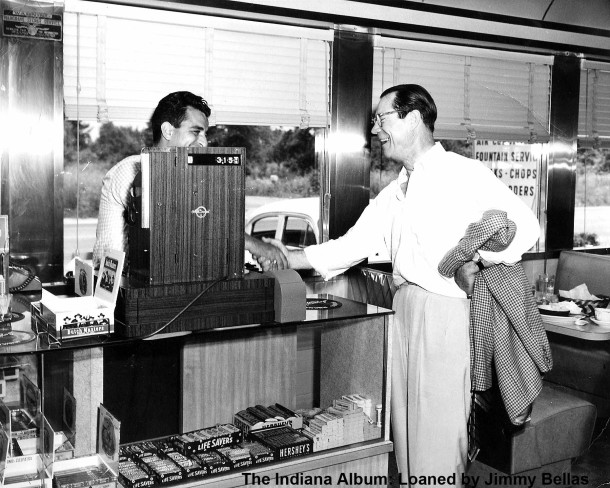 James Bellas enjoyed his time operating the diner in Indianapolis and recalled serving famous Indy 500 drivers and celebrities, including actor and comedian Joe E. Brown (see above), but he sold it after just a few years. His son Jimmy recalled: “Dad loved the thrill of opening new locations, ultimately that is why he only had the Diner for 3 or 4 years.  The story is that he attempted a partnership to go into the Big Boy business. To raise the capital for this new Big Boy, he sold the Diner.  The Big Boy deal fell through, and Mom and Dad moved back to Long Island to open (yet another) diner!  It was very disappointing for them, as they loved their time in Indianapolis.”

Circa 1970 matchbook cover for Dick’s Diner

In about 1960, the restaurant became Bill’s Diner, named after owner William J. Wurtz, and by the late 1960s it was renamed Dick’s Diner for owner Richard Supple. 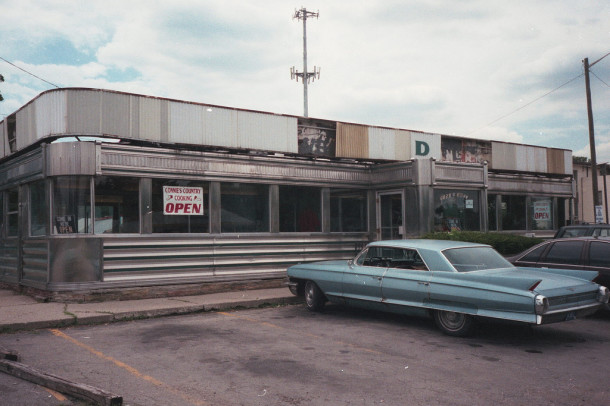 With a changing neighborhood demographic, from 1983 through 2001, the diner went from serving typical diner fare to southern home cooking. The name “Connie’s Soul Food Diner” used in 1990 reflects the change.

In 2002, owner Jay Pandey, who also owns the adjacent motel, restored the restaurant as a Subway chain and fortunately the diner’s stainless steel still gleams, although a little overpowered by the bright yellow signage.

Two other restored diners can be seen in or near Indianapolis. In 2010, Angie’s List moved a 1937 diner made by the Jerry O’Mahony Company in New Jersey from Cleveland to 1002 E. Market Street. Now named the Sanitary Diner, it serves staff only (the lack of restrooms prevents them from opening to the public as planned). The Oasis Diner, another Mountain View diner manufactured in 1954, stood for decades on the National Road west of Indianapolis near the Ronald Reagan Parkway. When the health department ordered the restaurant closed in 2009, due to structural issues, some thought it was the end for the popular hang-out. Indiana Landmarks placed the threatened diner on its “10 Most Endangered” list and the resulting publicity snagged interested buyers. A generous developer donated the structure when he bought the land, and the diner was trucked to its new location on Main Street in downtown Plainfield (look for a late October opening date).