Every few years I get a call from some alumni group desperately seeking photographs of their favorite drive-in restaurant for a 50th reunion booklet.  The Blue Ribbon, the Igloo, Jack & Jill’s, Northway’s, the Tee Pee, and this year’s most sought after photograph: the Northwood Drive-In at Meridian and 91st Streets.

The Carmel High School class of 1963 needs your help to locate a good image of  this favorite haunt from their teen years. Although not one of the best known drive-ins from this era, the Northwood has a long and interesting history and was a favorite of students from Carmel, as well as Zionsville, North Central, and Broad Ripple. Drive-ins date to 1921 when Kirby’s Pig Stand opened in Dallas. Henry Mewborn is credited with introducing the concept of delivering food to cars to Indianapolis in the early 1930s when he opened the Peacock Drive-In at Massachusetts Avenue and E. 38th Street. Most early drive-ins were housed in simple, boxy buildings, but the architectural style evolved through the years to include round buildings, prominent signs and neon, and awning overhangs to shelter cars and the carhops.

Although its early history is a little murky, Bill Agner, son of the long-time owner shared many memories of his father’s restaurant. William “Merle” Agner (1916-1996) was just a teenager in Florida when he met entrepreneur Samuel “Pop” Spencer who encouraged him and several other young men to come work at his Indianapolis drive-ins. Pop Spencer had several drive-ins, many of which were designed with textured plaster and dripping icicles, presumably to mimic the ice-cold treats that they served. In 1930 Merle started at the North Pole Drive-In at Illinois and 56th Streets where he worked his way up from soda jerk to lower management. During this time he met his future bride Maxine “Mickie” Young who he married in 1943. During World War II, Pop moved Merle to manage Spencers, his indoor and drive-in dining establishment located near Allisonville Road and Binford Boulevard (then Fall Creek Boulevard). Merle kept the restaurant going despite the difficulty of buying meat and other food due to rationing, but the place eventually closed in 1949 . From there Merle moved to Pop’s Spencer’s Northwood Drive-In, described on this ca. 1940s matchbook cover as “Indianapolis Suburban Refreshment Center.” 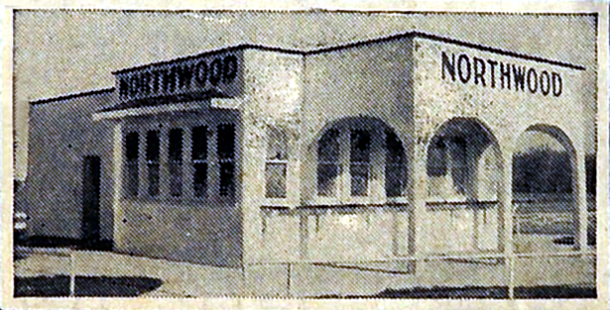 When established in the 1930s, the little drive-in was isolated far north of the city of Indianapolis and among fields and groves of trees, thus the unknown original owner chose the descriptive name Northwood. By the time Merle became manager in about 1949, a couple by the name of Underwood owned the land and leased the building to Pop Spencer. Bill Agner recalls that the restaurant exterior had a rough texture, probably plaster or stucco. Bill starting working for his father in 1954. At age eight he passed out balloons to diners and then was promoted to head “paper picker upper.” The 1950s and ’60s were the heyday of drive-in restaurants and Merle had a crew of over a dozen inside workers and 30-40 carhops. They worked hard in an era when everything was made from scratch. Bill recalled orders being placed from produce supplier Sam Rose for two tons of potatoes, delivered in 100-pound burlap bags, and hand-peeled by prep staff. Happy was the day when a mechanical potato peeler arrived to relieve them of this labor-intensive job.

Merle oversaw every detail and made sure the food was good and delivered on time (a claim that could not be made by Al Green’s Drive-In, who in later years made the most of their slow reputation by printing t-shirts with the slogan “Same Day Service”). The Northwood was best known for their cheeseburgers and other sandwiches served on toast (never buns). The place was always hopping, seven days a week from 11:00 a.m. until 12:30 a.m. and 1:30 on the weekends–but as long as there was a crowd they kept serving. Cruisers circled the place, driving back and forth between the circuit of drive-ins, and Merle sometimes hired off-duty policemen to monitor the traffic. The place closed up for the winter beginning in October, but Merle chopped down evergreen trees south of the drive-in and sold Christmas trees during December.

In about 1952 Merle leased the building directly from the owners and eventually bought the property in the mid-to-late 1950s. After the 1962 season he demolished the old structure and built a larger, modern restaurant/drive-in, a corner of which is seen in these advertisements from the Northerner, North Central High School’s yearbook. Just a year or two after completion of the new building, representatives from Frisch’s Big Boy approached Merle and, feeling tired of being on his feet, he decided to lease and start enjoying life. Frisch’s Big Boy operated at this site for about five years and then a flurry of restaurants came and went: Ed Roger’s “Deli Den” lasted only a few months, followed by Julio’s, the Reunion in the 1970s, and finally Mac’s Steak House which started in the late 1970s and closed by 1990.

For those of us only familiar with the built-up northside area, it is fascinating to view aerial photographs showing the development from farmland to full-blown suburbia. In 1937, the drive-in’s only neighbors were a couple of farmhouses, but by 1956 houses started sprouting up along nearby Delaware Street. Commercial buildings transformed this section of Meridian Street in the 1970s. 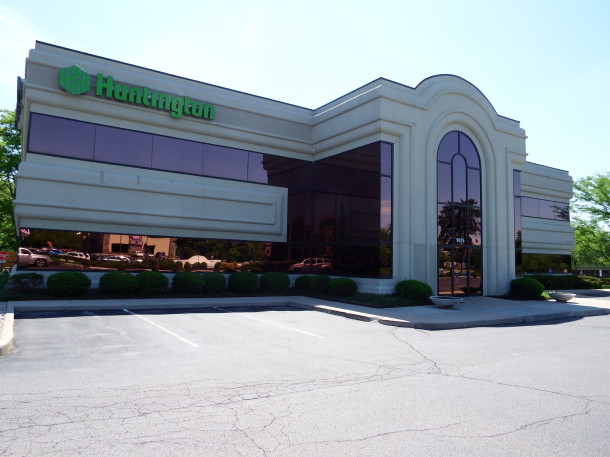 In 1990 the current commercial building was constructed on the old Northwood Drive-In site and today it is the property of Circle Financial Corporation, owned by Senator James Merritt, Jr. Tenants include a travel agency and Huntington Bank.

Do you have any snapshots or photographs of the Northwood Drive-In or other drive-ins and restaurants (or any other cool building in Indianapolis, for that matter)?  Share your photographs for future Indianapolis Then & Now articles by emailing descriptions and 300 ppi scans to thenandnow@historicindianapolis.com.