The near southside of Indianapolis was a melting pot of Appalachians, African Americans, several ethnic groups, and a large Jewish population from the early 1900s through the 1960s when many Jewish residents migrated north away from downtown. During the early 20th century, the southwest corner of South Meridian and McCarty Streets was a busy place in the neighborhood. The brick Italianate building on the corner housed a pharmacy for decades, including Harry Neller’s Drugstore in the 1920s and ’30s and Passo Drugs. Pharmacist Albert H. Passo (1913-1998) and Issie H. Passo operated the corner store from the 1940s through the 1970s. It appears in this early 1970s photograph that there had been a fire and the windows are being boarded up.

Russian immigrants Louis and Rebecca Shapiro opened Shapiro’s Grocery in 1905. Their three sons, Abe, Max, and Izzy, expanded the business as a restaurant after Prohibition ended in 1934. Shapiro’s web site states that they sold ten cent beers and people wanted some salami and corned beef sandwiches to go along with the brew, so they added a few tables. Eventually Shapiro’s expanded to the corner. 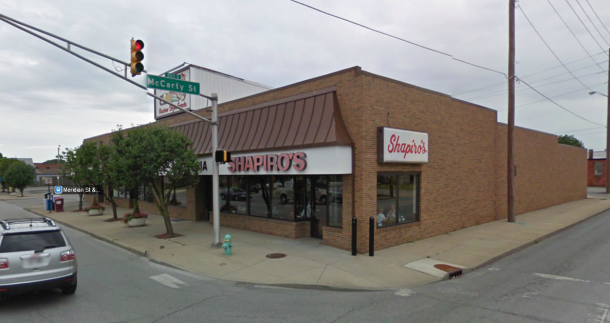 Shapiro’s Delicatessen and Cafeteria was remodeled in 2003 after a fire and standing water damaged the interior. The New York-style deli, known for its large corned beef and pastrami sandwiches on homemade rye bread, is the last of the Jewish businesses in the old southside neighborhood and is now operated by a fourth generation.

Luckily, the history of this area is being recorded by Associate Professor Susan B. Hyatt’s IUPUI anthropology students in a project called “The Neighborhood of Saturdays.” For several semesters, students in a community research class have been interviewing former African-American and Sephardic Jewish community members who once lived side-by-side in the Concord/Babe Denny Neighborhood. The students have recorded interviews and scanned photographs and other documents and will publish a book in the near future.

Read more about their work in this New York Times article.