Some of the earliest images of Indianapolis streets and buildings are found as stereoviews, two views of the same subject photographed from slightly different angles. When the mounted side-by-side prints are viewed with a special device called a stereoscope, the images appear to pop off the photograph with a slightly three-dimensional effect. Several photographers made stereoviews of Indianapolis in the 1870s and one of the most prolific appears to be Charles Ingraham, who worked with partner David Claflin in the early 1870s. Specializing in landscapes, the photo gallery documented houses, parks, stores, and churches, including the new Second Presbyterian Church located at the northwest corner of E. Vermont and N. Pennsylvania Streets. This view looks north at the church from E. New York Street with University Park in the foreground. In the distance to the left is the cupola of the Indiana Institute for the Blind. 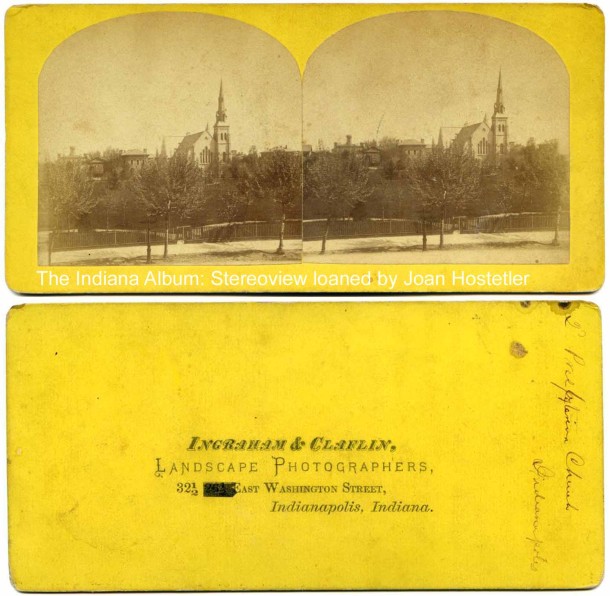 Luckily, handwriting on the back identifies the church and city. Bright yellow was a popular color for stereoview card mounts in the 1870s. The backstamp further narrows the date to 1872- 1874 since Ingraham and Claflin only worked together during this three-year period. David B. Claflin left the partnership in 1874 and Charles Ingraham continued working alongside his accomplished artist wife Ellen, who hand colored and retouched the photographs. (However, one must be careful when dating with backstamps since Ingraham and Claflin could have used one of Ingraham’s earlier negatives made before he took on a partner. The crossed-out gallery address of 26 1/2 E. Washington St. replaced with 32 1/2 might be a dating clue, but the partners never appear in directories or newspaper ads at any location other than 32 1/2 so this might simply be a corrected typo.) 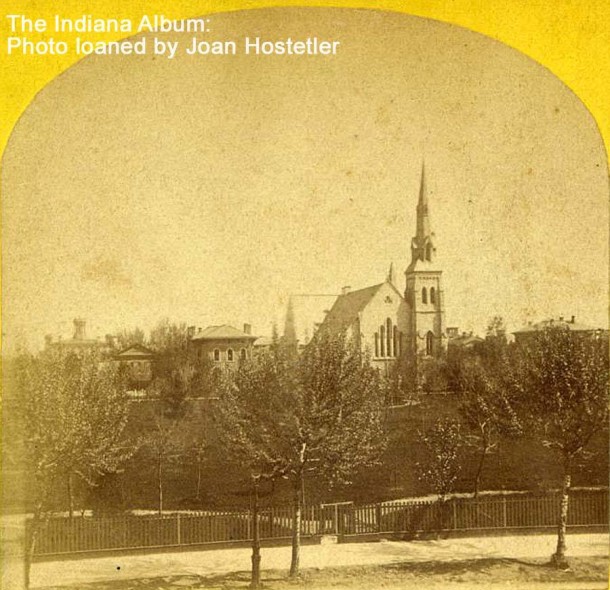 After breaking off from the original Presbyterian Church due to a national division over new and old doctrines in the late 1830s, Second Presbyterian Church members built their first house of worship on the Circle in 1840. The church thrived in the 1840s under the leadership of its personable young preacher, Rev. Henry Ward Beecher. After the city’s population boom in the 1860s, the growing congregation needed a larger church and chose to construct a new building on a parcel three blocks away. Some congregants worried that the site was too far north (one wonders what these members would think of the church’s current location at 77th and N. Meridian Streets). The $105,000 stone Gothic Revival structure seen in this photograph was dedicated in 1870, although parishioners used the chapel as early as 1867. 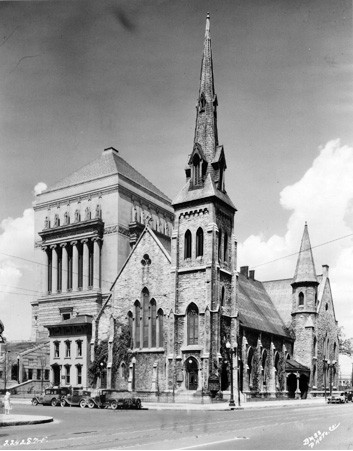 Although the Indiana World War Memorial Plaza was built on five blocks in the 1920s, Second Presbyterian Church and First Baptist Church (located at Vermont and Meridian Streets) held out as dozens of houses, apartments, clubs, and business buildings were acquired and demolished. It was not until 1960 that the old church was razed after the congregation moved to 7700 N. Meridian Street. 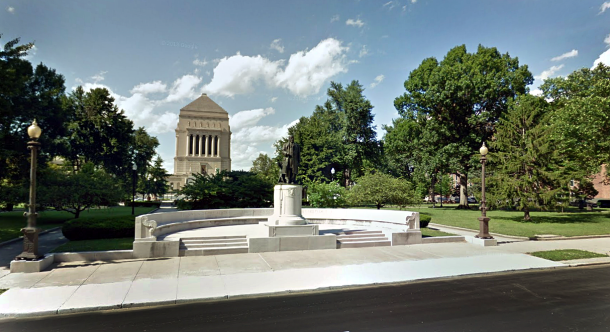 Where visitors once entered University Park through a a picket fence and gate off of New York Street, now stands a bronze statue of President Benjamin Harrison by sculptor Charles Henry Niehaus. The statue, as well as the limestone plaza and curved bench (designed by Henry Bacon, a Beaux-Arts architect best known for the Lincoln Memorial in Washington, D. C.), were unveiled in 1908. The World War Memorial, the centerpiece of the five block Indiana World War Memorial Plaza, was dedicated in 1933.

Request: Hundreds of stereoview images of the city were made in the 1870s and 1880s by Indianapolis photographers and we would like to scan as many as possible and make them available through a project called the Indiana Album. Please contact us to loan photographs for this community digital album.