We need stories about the Westside Outing and Social Club, so please help spread the word.

Crowdsourcing is a relatively new term coined to describe a large group of people working together, particularly online, on services, ideas, or content. Crowdsourcers, as they call themselves, have transcribed the recently-released 1940 census, typed up menus for the New York Public Library, and helped the Library of Congress identify some of their mystery photographs.

Whether you knew it or not, as readers of Historic Indianapolis.com you have participated in crowdsourcing by sharing your memories, comments, and research. So today, I rather prematurely offer up some newly acquired photographs of the Westside Outing and Social Club in hopes that some HI readers will contribute to the cataloging of these images. I’ll tell you what little I have dug up so far, then please comment to help pinpoint the date and uncover the history of this interesting social club with a long history.

Just today I ripped open my latest eBay package to find two undated photographs of a restaurant or tavern. The window to the left in the exterior view advertises “REAL ESTATE” while the sign on the right reads “WEST SIDE OUTING AND SOCIAL CLUB / MEMBERS ONLY.” Luckily, the photographer of the interior view marked his work as “Charles J. Bell, Indpls., Ind.” so that narrowed down the location and date (Bell started in business around 1920). A quick search in city directories and fire insurance maps revealed the address as 710 N. Warman Avenue, in the ethnically diverse Haughville neighborhood. 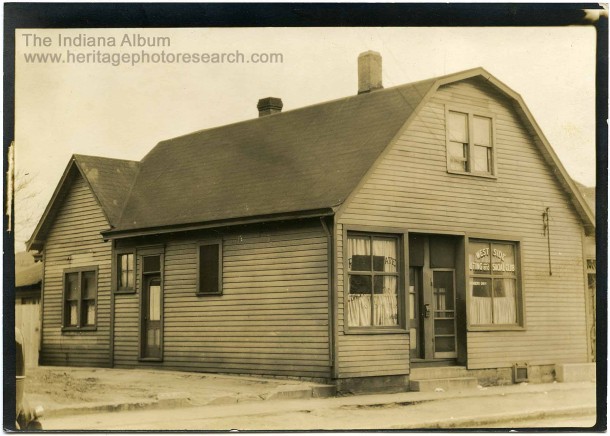 The Indiana Album: From the collection of Joan Hostetler

Haughville was incorporated in 1883 and named after the Haugh, Ketcham, and Company Iron Works.  Slovenian immigrant workers, known for their metal-working abilities, were recruited to work at National Malleable Castings Company, the area’s second foundry. Shortly after Indianapolis annexed the town in 1897,  nearly half of Haughville’s residents were Slovenian, but other ethnic groups included Hungarians, Poles, Austrians, and Macedonians. In the 1940s, families in the 700 block of Warman Avenue near the club included Radakovich, Komlance, Krapes, Zunk, Urbancic, Bayt, Semanich, Rinani, Graneff, Medvescek, Skoda, Deganutti, Yerich, Praprotnik, and Quiatkowski.

So far, it appears that the club was built as a house, but served as a saloon, barber shop, and restaurant as early as the 1910s. The commercial-looking addition with a gambrel roof was probably added in the 1920s or ’30s. 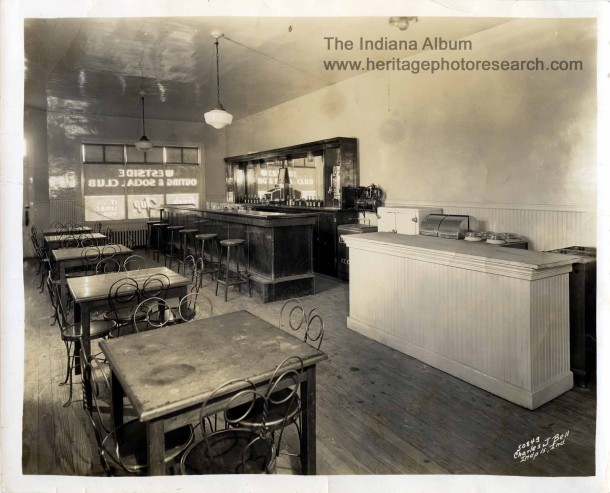 The Indiana Album: From the collection of Joan Hostetler

The age of the photographs appears to be 1920s-1940s, but there are a couple of internal clues. The 7up bottles lined up on the backbar and the 7up window sign reveal that this is after 1929 when the lemony soft drink was first marketed (just a few weeks before the Wall Street Crash of 1929). Also, the lack of alcohol bottles and beer advertising might indicate that this was taken prior to the end of Prohibition in 1933. Incorporation papers for the club were first filed in 1930. Note also that the front windows have been modified from the earlier exterior view.

In his Authorized Autobiography (ca. 2003), former patron Charles Warren Lucas included a short description of the club in the early 1950s when he and his new bride Wanda lived in Haughville (nicknamed “Hunkietown”). Comparing it to the local VFW bar he writes “The Westside was a little more upscale having several of the cities [sic] movers and shakers as members. It was set up like a speakeasy: you had to ring in to be admitted. It was normally packed on Fridays and Saturdays.” He revisited his old neighborhood in the late 1980s, noting that “the neighborhood had deteriorated badly over the years….The place was just a shadow of its old self: I found it a little depressing, but it brought back memories. I moved on down to the old West Side Outing and Social Club. It had succumbed to the neighborhood. The old speakeasy-club was no longer. What memories I left there!” 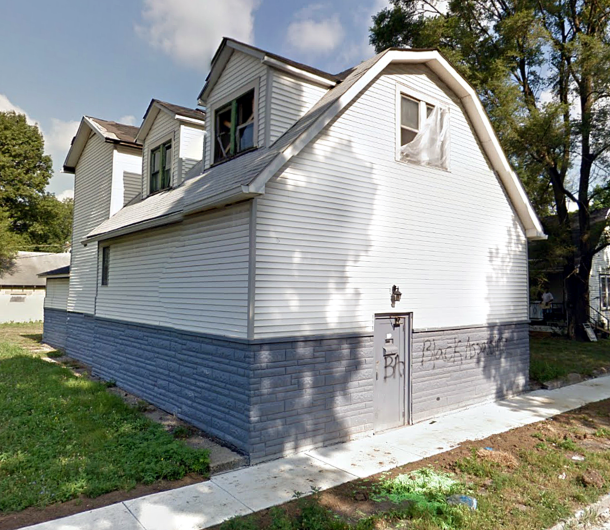 Back additions, dormer windows, vinyl siding, and faux stone cover up the fact that this was once a bustling club in a busy Slovenian neighborhood. Surely there are memories out there among the HI readers and other clues in the vintage photographs (view enlargements of the exterior and interior).

So this is how crowdsourcing works: Write your comments below. Read other comments and gently correct mistakes. Look at the photo enlargements and make dating suggestions. Share this on Facebook and email it to your friends, particularly those with Haughville connections or to anyone named Zunk. If we get enough data, eventually I will update the article with any information we gather. Some of my questions are:

1. Who started this and when?
2. What is an “outing” club?
3. When did the place close?
4. Who were the members?
5. Was this basically a bar? Then why did they require membership?
6. Did they serve alcohol during Prohibition? (didn’t they all?)

Thanks for your help!

UPDATE (6 March 2014)
Thanks to the many people who privately wrote to share stories of the Westside Outing and Social Club. Here are some details from Mark Zunk, a nephew of the owners:

I can offer you many stories about the Westside Outing & Social Club. We knew it simply as “the Club,” as did most folks in Haughville. Not all of the stories about the Club would be for publication. Uncle Louis ran the Club until his sudden death in 1982. After that, my aunt, Vera Zunk ran it for some years, before closing it several years ago. She passed away last November at the age of 92. “Lefty” Milharcic [one of the other early owners] died in the late ’60’s. To call him “much beloved” would be an understatement. I’ll never forget the time he introduced dirty little ten year old me to then US Senator Vance Hartke in the Club. The Club at the time was a bit of a Democrat power center in Indianapolis.

At one time, the pastor of Holy Trinity parish, Msgr. Edward Bockhold, expressed his concern that some inappropriate activities may have been going on upstairs at the Club. He was reassured after my mother explained to him, over a beer on our front porch, that it only involved card-playing, and certainly not ladies of ill-fame.

Check out the many comments below, too. This photograph has now been cataloged at the Indiana Album, an Indiana Bicentennial project bringing photos from the attic to the web. Your memories help make Historic Indianapolis great. Keep the stories coming!