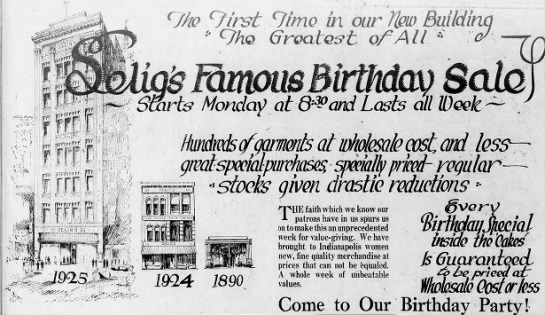 When considering Indy’s shopping legacy, many think of longtime institutions, L. S. Ayres, William. H. Block’s, or Wasson’s. While those venerable names are still remembered fondly by many, other retailers offered similar experiences and had a fine reputation not only in the circle city, but across the country. Unfortunately, many stores did not survive the Great Depression. One of those was the Selig’s Dry Good Company, which offered fine women’s apparel and other items from 1890 until disbanding in 1932.

This 1925 Ad ran the last Sunday in February advertising the latest flapper fashions. The store was temporarily located on South Meridian Street during this era. (Image: Indiana State Library)

In 1908, the store moved into the high rent retail district along West Washington Street. After the move, the store stopped operating as a general dry-goods department store and began specializing in high-end women’s fashion. Business must have been good since, in 1914 the store bought out the Henry Huder drug store located at 22 West Washington Street to expand its offerings. Advertising during the time boasted the finest in women’s fashion, comparable offerings to the likes of what you’d find in New York City or Philadelphia. 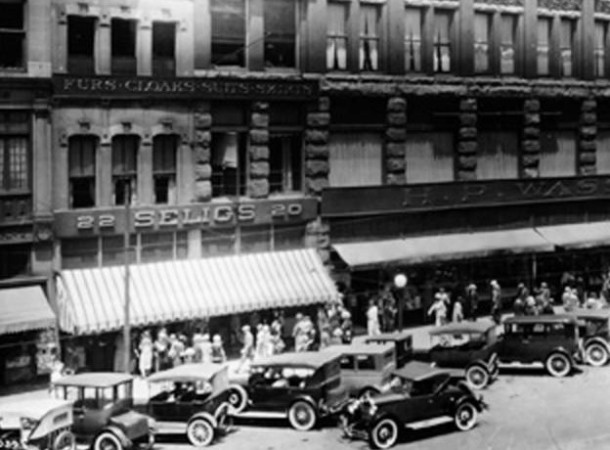 The Selig family suffered the tragic death of son, Sidney, in 1919, followed shortly thereafter by patriarch, Moses. Despite these setbacks, the family undertook a grand remodel. The original structure was demolished, and a grand seven-story building sprang up on the same site. The store temporarily relocated to South Meridian Street. During that time, Herbert, the last remaining Selig son, passed away, leaving the store in the hands of the widow, Mrs. Moses Selig, and a Mr. Hahn. The store celebrated its 37th anniversary in grand fashion in 1927, with a large birthday cake that set Washington Street ablaze with light.

In 1930, Samuel Hahn retired amid an illness and turned the reigns over to Grover Millet; however, by this point, the Depression loomed large in the life of the typical Indianapolis consumer. The store went in to receivership and was gone for good by 1932. In 1933, the building became the longtime home of Morrison’s Women’s Apparel. By the 1970’s, the former store stood vacant. Things got livelier for the building again in the early 1980’s, as the city tried to acquire the entire block where Selig’s Building stood from the Goodman family, owners of Goodman Jewelers. During this time, many art shows and performances were staged on the upper floors, while plans to build Circle Centre north of Washington were scrapped. The Selig’s Building interior was remodeled into office space. Today the ground floor serves as the longtime home of Rock Bottom Restaurant & Brewery. 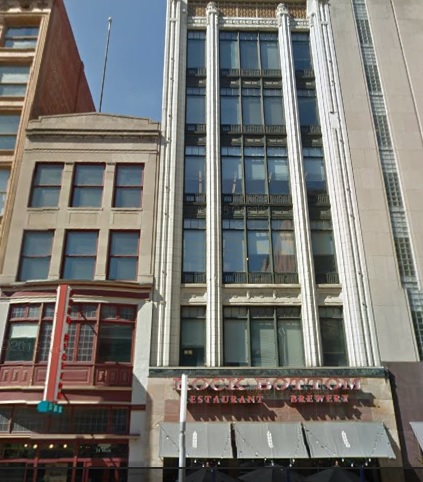 The Selig Department Store building as it appears today.