You can always count on being inundated by a small forest’s worth of furniture advertisements in the Sunday newspaper. These days, acquiring that perfect furnishing may involve driving to a sea of strip malls in all four corners of the city, but for many years, Indy residents could head to 128 North Pennsylvania Street. That site also links to our modern skyline.

The Vajen Exchange Block is one of the oldest facades left downtown.  Constructed in 1872 by German immigrant John Vajen, the building housed the namesake’s hardware business and a grain exchange, explaining the ears of corn displayed on the piers of the building. After Vajen’s retirement, the building hosted a number of retail establishments, and by the early turn of the century, the Pearson Piano Company took over the ground floor. The Pearson Company survived a massive fire in 1922 and diversified into other furnishings and appliances after the rise of radio quelled the need for people to make their own music.

James Kittle founded the well known Kittle’s furniture store just a few doors down in 1932. By 1946 the company relocated to larger digs at 120 East Ohio Street. In 1967, plans were unveiled by Indiana National Bank to erect the state’s tallest office building on the site of the Kittle’s store, leaving the retailer grasping for a new location. Kittle’s then purchased the Pearson Company and moved into the historic Vajen Exchange Block. 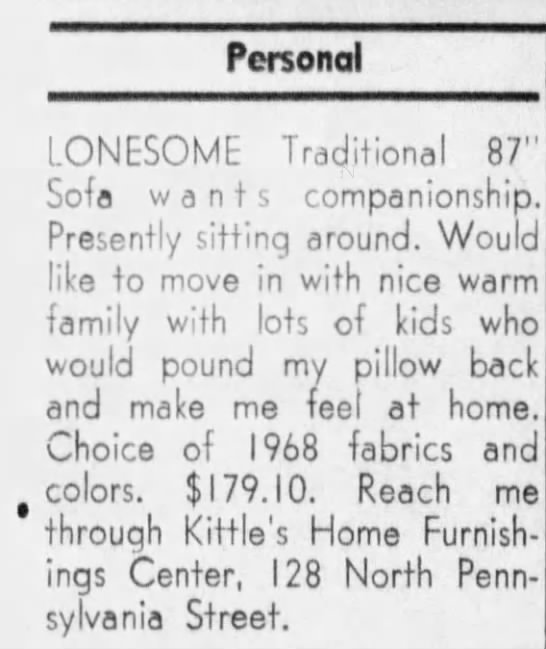 A clever ad placed by Kittle’s in the Indy personals in the ’60s. (Image: Indiana State Library)

As the seventies came to a close, another local banking giant was licking its chops at the Kittle’s site. Despite a massive remodel in 1977, Kittle’s sold to the American Fletcher National Bank, which intended to erect an even bigger structure.

The Vajen Exchange Block, along with the much lamented Hume-Mansur and Board of Trade buildings were purchased for demolition in 1980. Fortunately, the ornate Italianate facade was saved by Indiana Landmarks and preserved until it could be integrated (at least in part) to the Circle Center mall. The facade may now be found in the 100 block of South Meridian Street slightly shorter, the original ground floor was removed. After years of delays, Bank One (now Chase) erected the tallest building in the state in 1989. 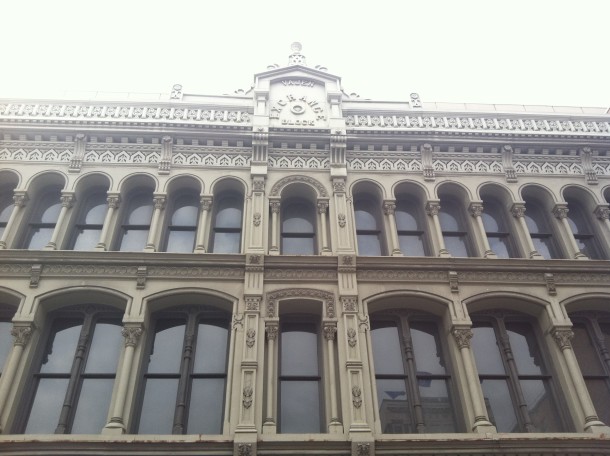 The ornate facade of the Vajen Exchange Block today.