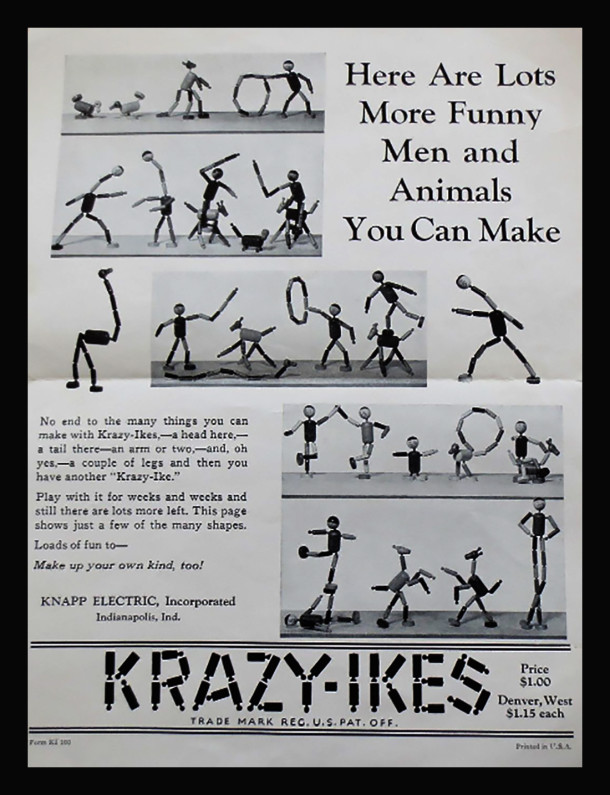 Introduced in the late 1920s by the Knapp Electric and Novelty Company (1895-1940s), Krazy Ikes were a wooden construction set from which the manufacturer promised children would “build a thousand funny things — all different.” Krazy Ikes consisted of various pieces that could be assembled to make people, animals and silly-somethings best called… Ikes. The slender connector pieces were about pencil-thickness and one to two inches long. These could attatch to knobs on the body, head or foot pieces.

As the popularity of Krazy Ikes endured, the company developed the Krazy-Ikes Game. It was patented in 1930 and manufactured in Indianapolis.  The pieces were wooden and came in red, blue and yellow.  A complete game set will include 28 red pieces, 19 blue pieces and 22 yellow pieces.   The Ikes remained largely the same through WWII, having had the good fortune to be made of one of the few materials with no rationing restrictions. Whitman Publishing Company (better known for children’s books) eventually purchased rights to the toy and converted its production to plastics. 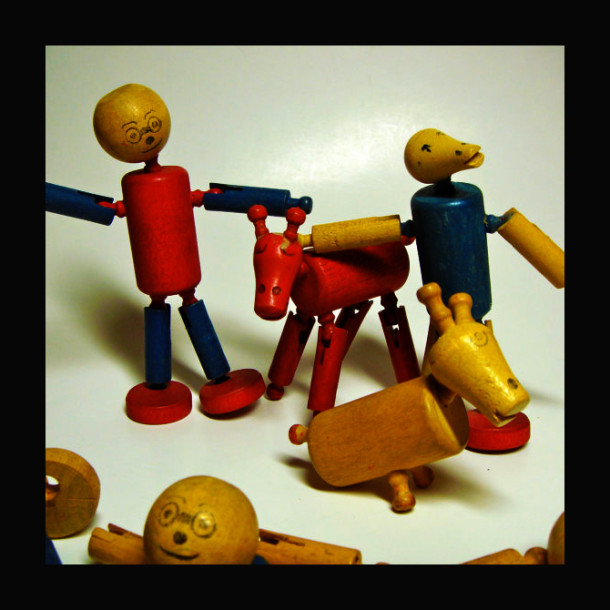 In its first incarnation, Krazy Ikes were cleverly fashioned wooden pieces that children could snap together to make a variety of strange creatures. Wooden connector pieces proved to be somewhat fragile and the pieces were later wrought from plastic. Image credit: eBay 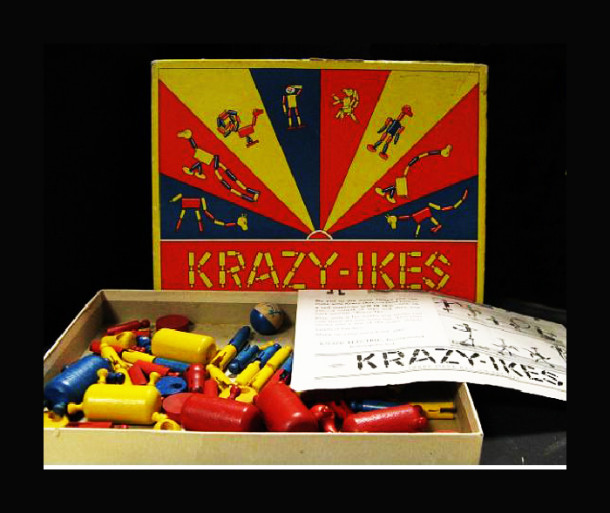 The Knapp Electric and Novelty Company was not a utility, but rather a toy and game manufacturer founded in 1895 in New York City by inventor David W. Knapp. The company moved to 3029 E. Washington Street, Indianapolis in the 1930s. Knapp specialized in electric motors, electric toy automobiles, board games, shocking coils, dynamos, toy trains, and magic kits. The company’s most popular game was probably The Knapp Questioner, manufactured from the 1890s through the late 1940s. This battery-operated quiz game advertised that it supplied “Answers by Electricity” (a great novelty in toys of the early 20th century). A correct answer to a question would elicit a buzz when contact was made with probes between question-and-answer studs on heavy paper over-lays. The game usually came with a number of question and answer sheets that Knapp also sold separately with subjects covering literature, nature, history, science, religion, current events and more. 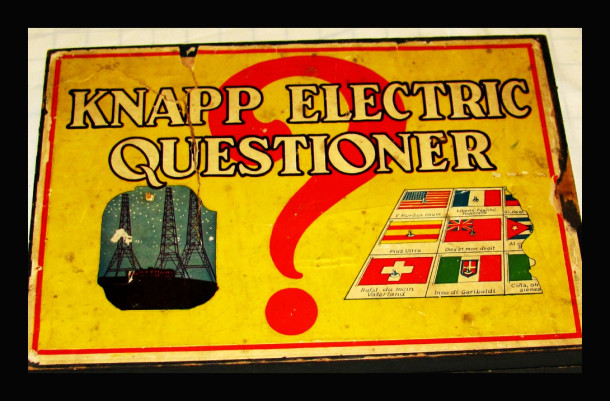 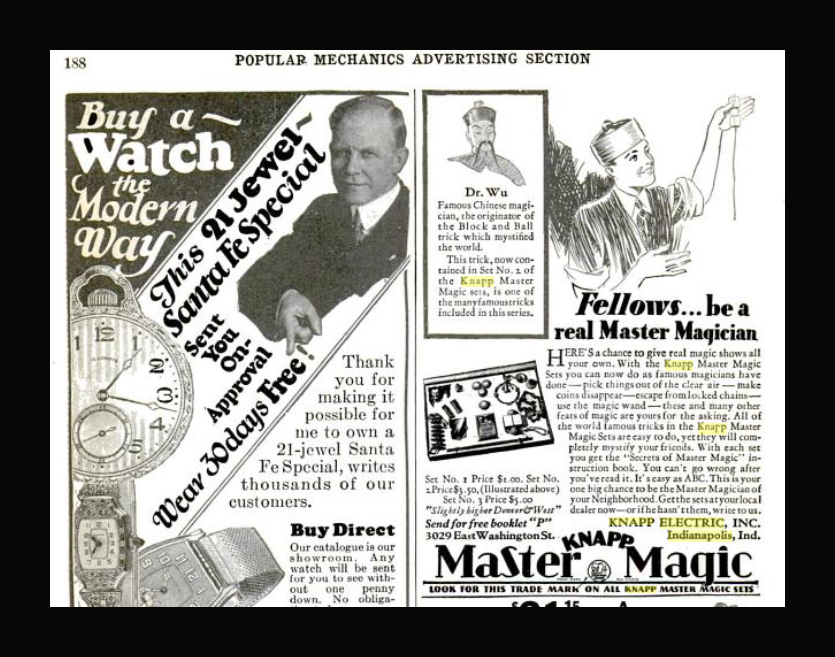 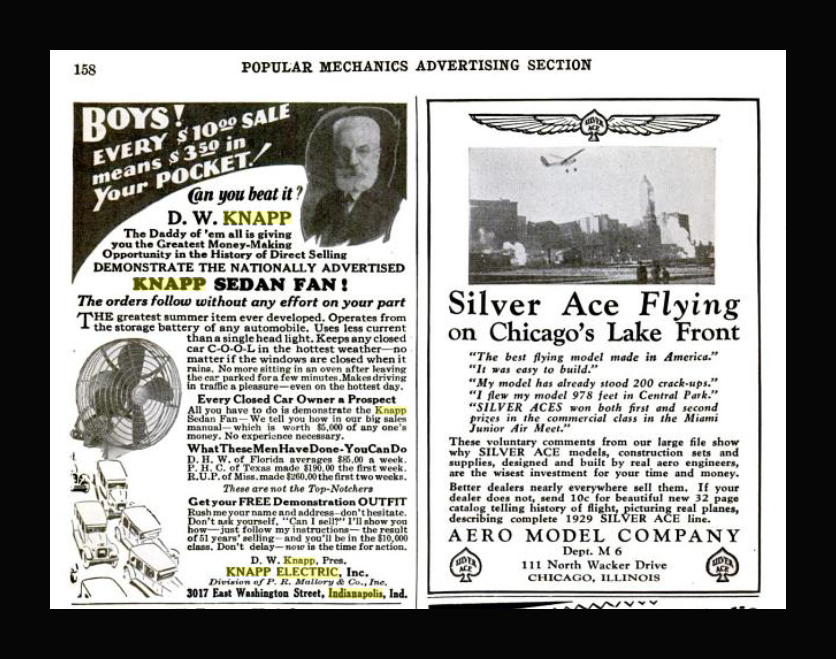 An interesting side-story connects the Knapp Company with the birth of well-known game, Monopoly. In 1935 the makers of Monopoly, learned that Knapp Electric was selling a game that bore a remarkable resemblance to, and predated theirs. Knapp called the board game Finance. In order to reduce competition in the upcoming gift-giving season, the Monopoly makers offered Knapp enough money for them to relinquish not only the rights to the game but also their entire inventory. (The amount is rumored to be $10,000 — a tidy sum for the time.) 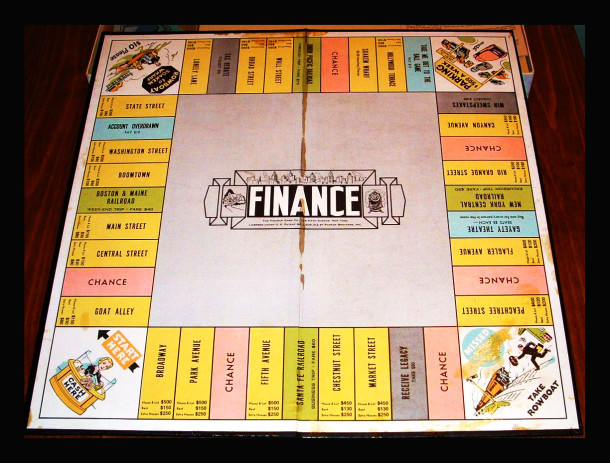 Finance, a Knapp board game predating the well-know Monopoly game, is a rare find. Image credit: The World of Monopoly 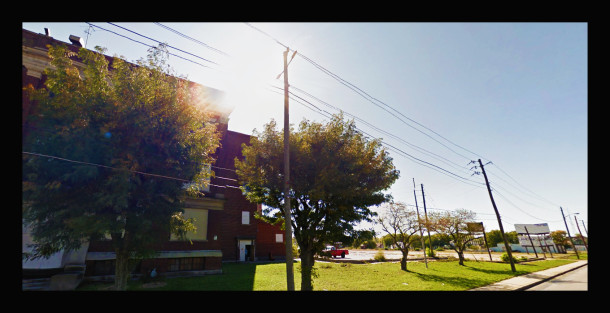 Not much remains of the Washington Street block where the Knapp Electric and Novelty Company resided in the 1930s.

Do you collect Indianapolis novelties?

Tell us about your collection in the comment box below… 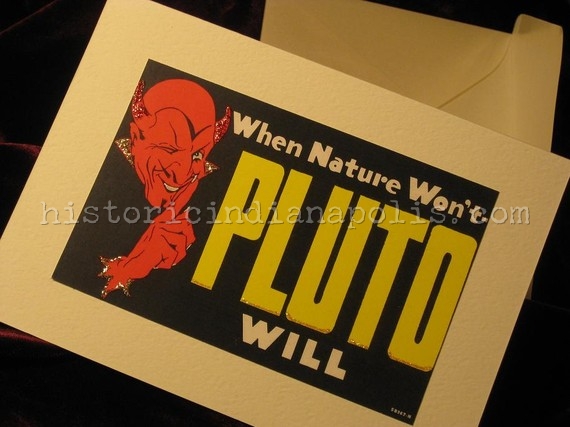 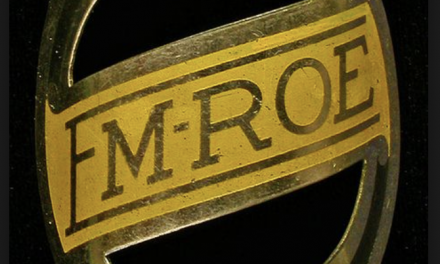 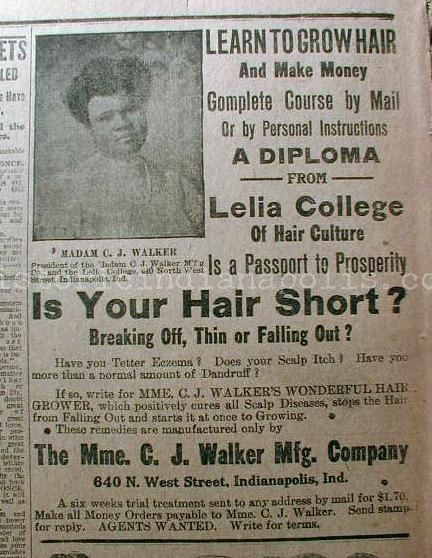