Indy was Wild about Harry
Though born Erich Weisz on March 24, 1874 in Hungary, the man we know as Harry Houdini moved with his family to Wisconsin as a toddler. He was fascinated from boyhood with magic, and began performing illusions for money to support his family as a teenager. Though he loved magic, he drew his greatest commercial success from daring feats of escape. These spectacular stunts would make him one of the most famous performers of all time — eventually becoming the highest-paid American vaudevillian. Houdini performed his act all around the world while constantly upping the ante from handcuffs and straight jackets to water-filled tanks and nailed packing crates. 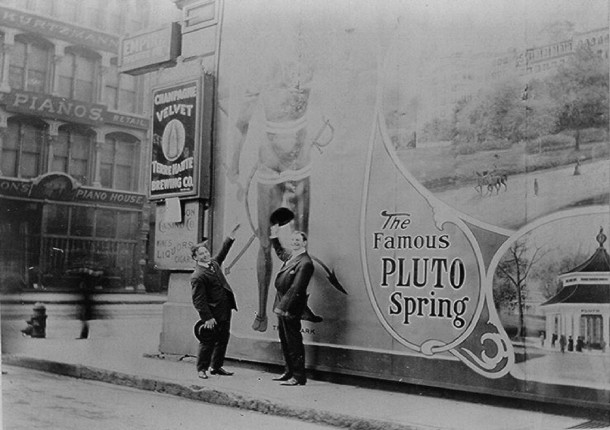 His act brought him to our fair city on numerous occasions. In fact Indianapolis had a bit of a love affair with Houdini. Enthusiastic crowds packed every performance. In his own words…

“It is a wonderful tribute to The Indianapolis News for, with only one day’s publicity exploiting my performance, The News drew between 12,000 and 15,000 people in front of its building last Thursday at noon. I have performed similar feats in cities all over the world, usually with a week’s heralding. The News announced my intended public appearance in last Wednesday’s issues alone. On Thursday we had the show. The pictures tell the story.” 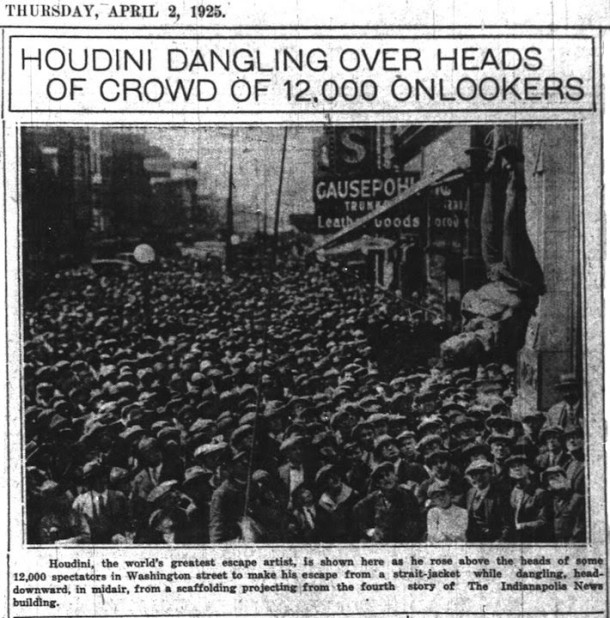 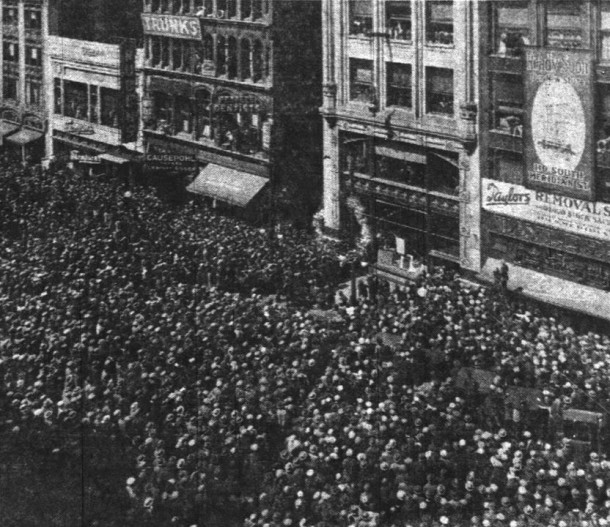 Houdini awarded photographer Robert A. Twente $10 for the best photograph taken that day. Houdini presented Twente his prize from the stage of B.F. Keith’s Theatre on the Saturday following the stunt. Runner-up prizes of $5 and $2.50 where award to Turner D. Bottome and the Coburn Photo Company respectively.

For one performance at the late B.F. Keith’s Theater, Houdini, ever an expert in publicity, tailored his performance to Indy locals by escaping from a tub of beer provided by the Indianapolis Brewing Company. 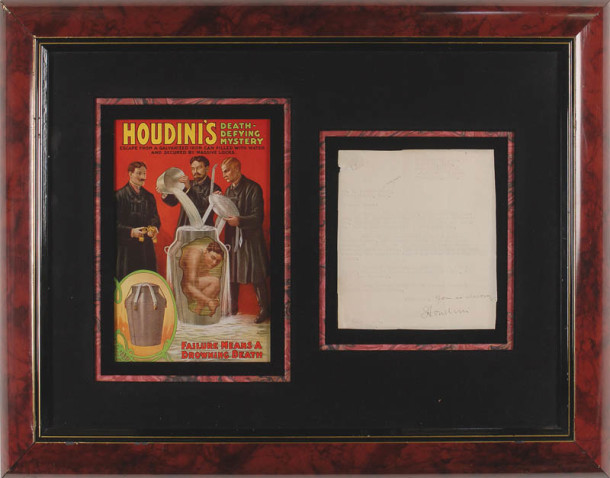 Handwritten letter to fellow magician T. Nelson Downs, discussing his exposure of fake medium George Renner, matted and framed with a reproduced Houdini poster. The letter was written during Houdini’s visit to Indianapolis in March of 1925. (Image: eBay)

Houdini’s success brought the kind of wealth that allowed him to indulge other passions: aviator, film actor, author, and vigorous campaigner against fraud. Though to early 20th century audiences, Houdini’s illusions may have seemed magical, he never claimed supernatural powers. Rather, Houdini relentlessly debunked spiritualists by imitating and then exposing their ticks. These exposures angered followers of Spiritualism–a belief system that found its peak in the US from the 1890s to the 1920s. 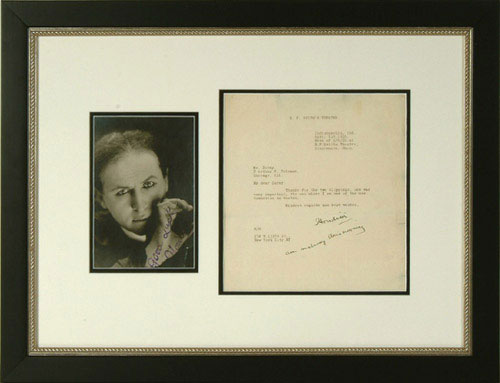 Houdini sent this letter from the B.F. Keith Theater on April 1, 1925, just before moving his show to Cincinnati. The correspondence to “Mr. Dorny, Arthur P. Felsman, Chicago, Ill.” reads in full: “My dear Dorny: Thanks for the two clippings, one was very important, the one where I am one of the new Committee in Boston. Kindest regards and best wishes.” The letter is followed by the handwritten postscript,  “am rushing this away.” The subject matter of the letter appears to refer to Houdini’s crusade to expose fraudulent psychics. Robert Edwards Auctions.

During one visit to the “Indy city,” Houdini called out Reverend Charles Gunsolas, a local spiritualist who claimed to be able to speak with the dead. Gunsolas agreed to perform this service in front of a crowd during one of Houdini’s shows, only to be debunked with the help of Houdini’s undercover operatives. Houdini’s crusade continued to draw unprecedented coverage wherever he went. Outraged spiritualists filled the papers with letters denouncing him in return. Of course, all of the attention was good for business for Houdini and theater owners.

Ironically, Houdini died on Halloween, 1926, and for 10 years after his death, his wife Bess held a yearly seance to try and contact her dead husband, using a secret password the two had devised to attempt to reach from beyond the grave. To this day, Houdini enthusiasts still hold Halloween seances in an effort to reach him. None has succeeded.

Sunday Adverts: What we did before google maps