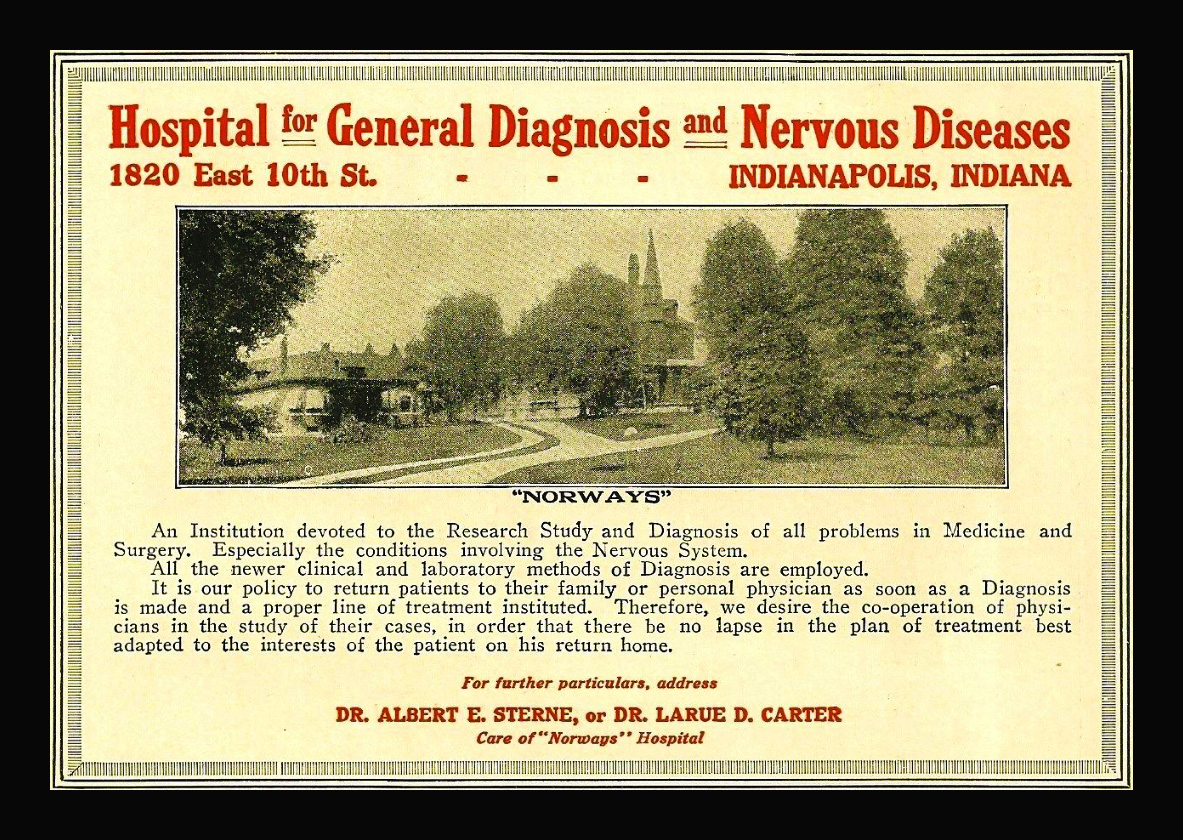 Concierge Doctoring…
In the second half of the 19th century, organic and psychological causes of mental illness began to be identified. This led to an increase, nationwide, in the number of institutions dedicated to the diagnosis and treatment mental illness as a disease. Until the early 20th century, the state assumed the primary responsibility for the care of the mentally ill in Indiana — a situation that was constantly fraught with controversy. During this time, two institutions served the needs of the mentally ill in Indianapolis: the Indiana Hospital for the Insane (forerunner of Central State Hospital) and the Marion County Insane Asylum (also known as Julietta). 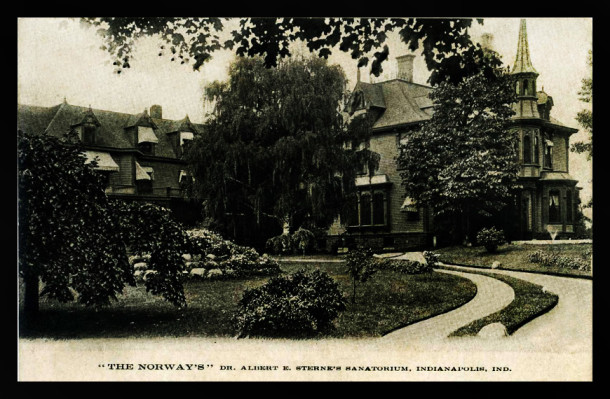 Enter: Dr. Albert Sterne who founded “Norways,” a private facility situated on what is now the city’s near-east side, to care for patients with nervous and mental disorders. As the advertisement above states, Norways was the first in the state to employ “the newer clinical and laboratory methods of Diagnosis” — and treatments such as insulin, metrazol, ultra-violet rays, massage, baths, diet, rest, and electro-shock therapy.

Dr. Sterne (1866-1931) was a Harvard- and University of Berlin-educated neurologist who studied in hospitals in Dublin, London and Strasbourg before coming to Indianapolis in 1893. Sterne established Norways Sanatorium in 1896 –an institution that continued in operation until 1957.

In addition to treating the mentally ill and those with “nervous” constitutions, the hospital specialized in helping patients with rheumatism, diabetes, digestive conditions, consumption, tuberculosis, kidney troubles, all forms of paralysis, drug addictions and even on occasion, cancer. 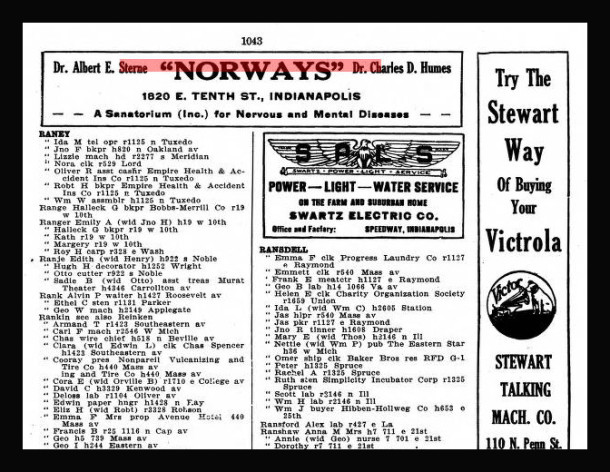 By all accounts, patient treatment at Norways was far superior to that of the state institutions. For some patients, especially those with minor conditions, a stay on the beautiful forested grounds where “Norway Maples” were plentiful, was almost resort-like. The sanatorium, located at 1820 East 10th Street just north/north-east of the Indianapolis Arsenal and Woodruff Place, attracted apparently-affluent patients from across the country who could afford a fee averaging $50 per week. (A stiff price, for the time.)

It is a place wholly and solely for the care and treatment of those who seek a restoration to health and strength. To this end, the sanatorium is particularly devoted. Large and commodious treatment-rooms, equipped with the finest apparatus, some of which is not to be seen elsewhere, are everywhere at hand, and make it easy to accomplish any desired method of treatment… Everything necessary to the comfort and care of those used to luxury is provided. Especial attention is accorded to the cuisine.” — Journal Handbook of Indianapolis 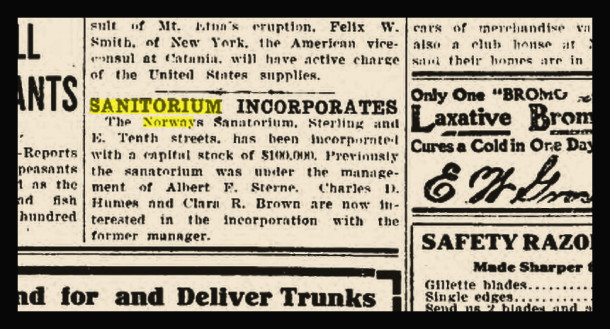 Article in the Indianapolis Sun, 1910 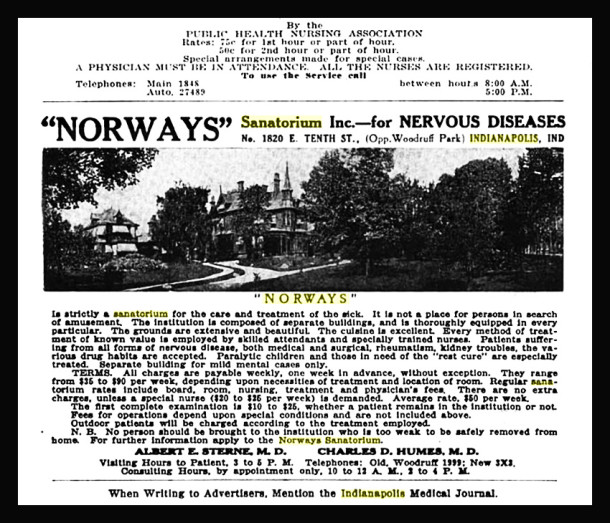 In 1932, after Dr. Sterne died, Dr. Larue Carter (1880-1946), namesake of the current Larue D. Carter Memorial Hospital on Cold Spring Road, became the medical director of Norways until his death. The institution closed in 1957 and the property was purchased by Kroger Company. The beautiful original buildings were demolished in 1958 to make room for a… grocery store.

(Doesn’t that just make you CRAZY???)

Yearning to know more about the history of the beautiful property where Norways once stood? Check out:
Then and Now: Clifford Place and Norways Sanatorium

Tell us on the comment box below:
Did you, or a relative, visit or work at Norways? 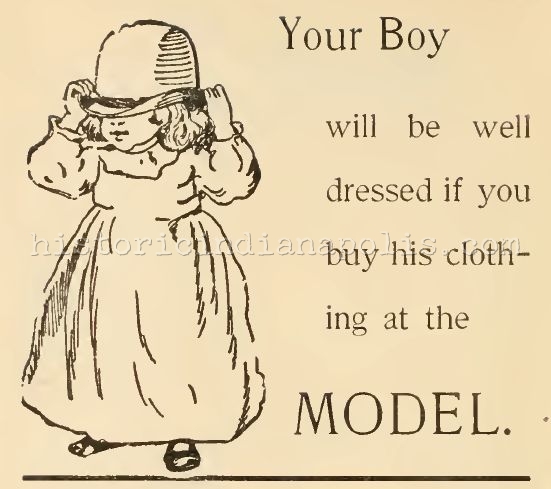