No passengers can be seen waiting in this 1970 photograph. (Image: Library of Congress)

Passing the Romanesque Union Station may create conflicting emotions for some. It is gratifying to see an impressive historic building restored–especially since other places, like Columbus and Atlanta, demolished their grand old train stations. It is also frustrating to see what was once Indy’s entry point so hushed and underutilized.

First time visitors to Indianapolis arriving by train for the 1966 Indianapolis 500 were horrified by what welcomed them. Newspapers described a huge, desolate structure inhabited by a handful of railway employees and a congregation of homeless people using the public space for shelter. Crumbling plaster and peeling paint were prominent throughout the building, and the once-polished terrazzo floors were caked in grime and covered with cracks. The scene was an appropriate metaphor for the decline in passenger rail service. The building, then owned by the Indianapolis Union Railroad, still stood only because there were no funds to demolish the structure.

A transfer of ownership allowed the building to exist in its rotting state for another decade. The Penn-Central railroad, facing bankruptcy, put the building up for sale in 1970. Under the leadership of Mayor Richard Lugar, funds were secured through a Federal grant to stabilize the building. Ownership came under a group of private investors awaiting support for a new use. Meanwhile, passenger trains continued to decline. Six daily trains served the station in 1971. The number dropped to two in 1975, and the last passenger train left the station in 1979. 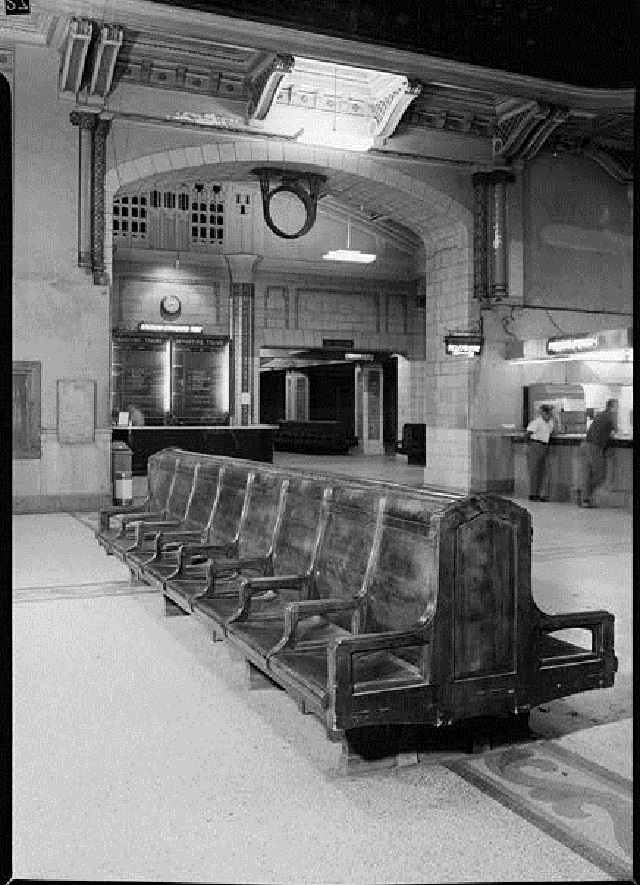 A lone customer stands next to a security guard at a lunch counter at Union Station in 1970. Notice the crumbling plaster at the top of the archway. (Image: Library of Congress)

In 1980, the city became the sole owner and immediately began making plans to redevelop the property into a mix of shops, nightclubs and restaurants. Under the leadership of developer Robert Borns, the project gained backing from the three largest banks of the time. In 1984, construction began on a 30-million-dollar project to convert the station into a “festival marketplace.” Featuring around fifty specialty shops, eleven restaurants and night clubs, a food court, and large arcade, the station became a hub of downtown activity upon its reopening in April of 1986. 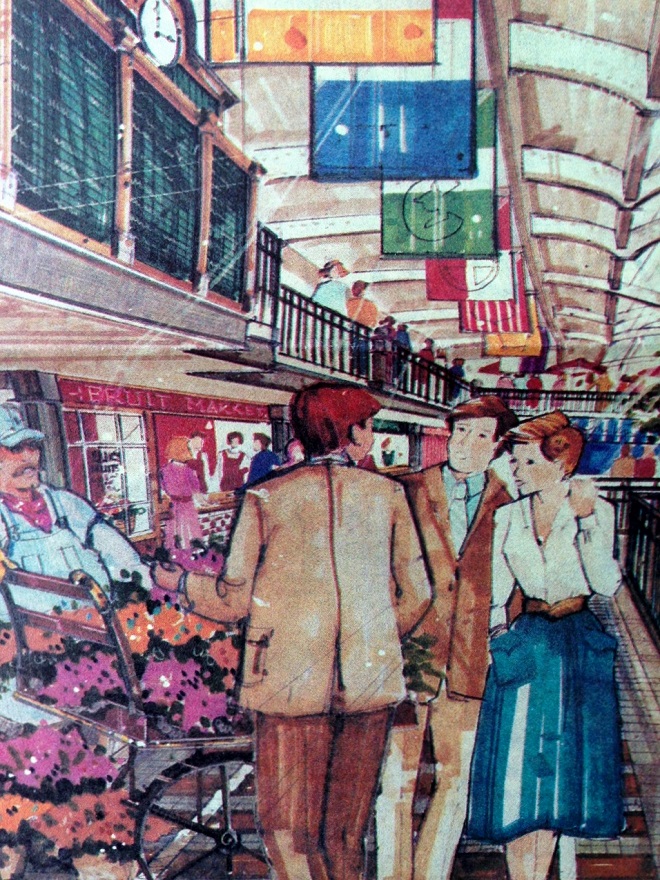 An artist’s sketch of the proposed marketplace accurately depicts the changes that took place to the train shed right down to the 1980’s fashions. (Image: Indiana State Library)

The renewed life of the station was short lived. Circle Centre Mall opened in 1995 sealed the station’s fate. The kitschy specialty stores that sold everything from magic tricks to Indianapolis shot glasses were no match for the national retailers one block away. The marketplace closed in 1997. Ghostly white statues were all that were left to inhabit the corridors. In recent times, the building has served host to a hodgepodge of businesses, including a charter school and the Mexican Consulate. The Grand Hall is banquet space for the Crowne Plaza Hotel, which is the sole survivor of the original project. A few storefronts can still be found intact behind closed doors. A particular point of interest is an apartment on the second floor overlooking the Grand Hall, still stuck somewhere in the eighties.

What is your dream for the future of Union Station? 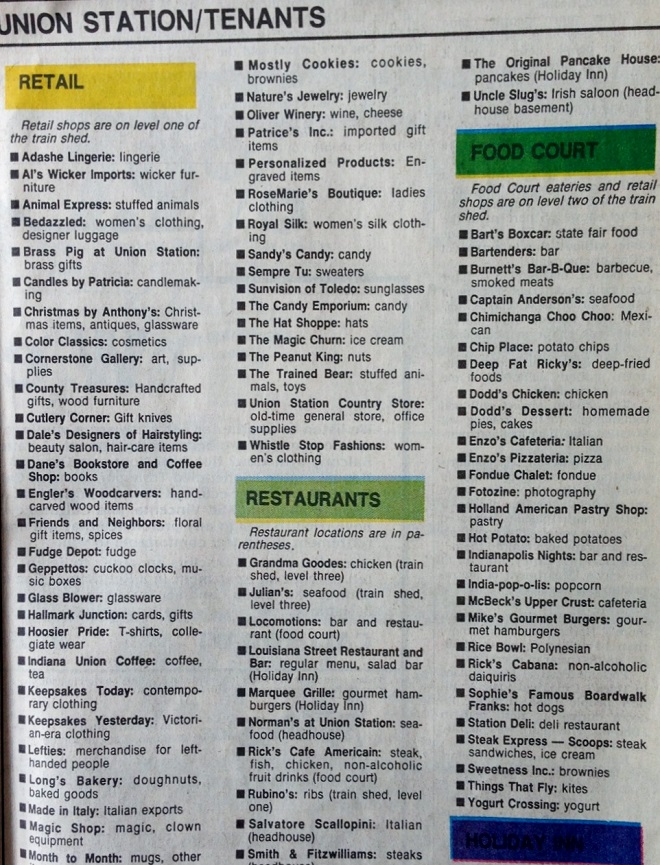 You can get a good of the scope of Union Station retailers in this pre-opening advertisement. (Image: Indiana State Library)