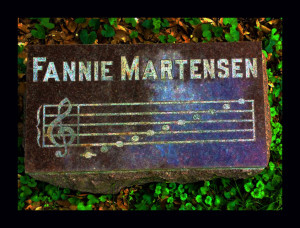 A walk through any graveyard will draw the eye and the imagination to the most unique monuments. Many of these memorials would have plenty to reveal about their plot’s occupant —  if only the rocks could talk! Take, for instance, the marker on Fannie Martensen’s (1865-1895) grave. Was she a spinster piano teacher? Big Band leader? A roadie for Frank Sinatra? Was she a world renown glockenspielist? Or, is this merely a cenotaph — a monument erected in memory of a person (or a group) whose remains are elsewhere.

Well, According to the April 6, 1895 Indianapolis Journal, Mrs. Fannie (Wade) Martensen was a singer who met a tragic end. Apparently, in a fit of temporary insanity, she cut her own throat and met her maker about a week later, having never fully recovered consciousness. The cause of death was officially listed as septicemia. She is laid to rest in Crown Hill Cemetery under a stone that celebrates her love of music, rather than her “trebles.” That seems fitting. 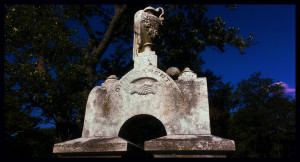 Some grave stone symbols are so common, we hardly notice them as we walk by. Some are unique and some are mysterious… Image: Union Chapel Cemetery, Lorentz

Stories in Stones…
In many, but by no means all, older burying grounds the graves are positioned east to west. The earliest settlers wanted their feet pointing toward the east and the head of the coffin toward the west, ready to rise up and face the sunrise, when “the trumpet shall sound and the dead shall be raised” (when Christ would appear and they would be reborn). If the body was positioned between the headstone and the footstone, with the inscriptions facing outward, the footstone might actually be facing east and the decorated face of the headstone facing west.  If the headstone inscription faces east, the body would most commonly be buried to the east of it.  Much depends on the age, terrain and layout of the graveyard.

Early graves were seldom arranged in neat rows.  Settler burials were haphazard and arose from a practical need to quickly dispose of a body for health purposes — particularly during epidemics. Families didn’t own plots. Burial spaces were even sometimes reused.  Generally, the north side of a cemetery was considered less desirable and was often the last part of the grounds to be used. In some cemeteries the north side was set aside for slaves, servants, victims of suicide, and “unknowns.” With the coming of the Rural Cemetery Movement in the 1830s and 40s, however, an entirely new style of burial became popular — in a more organized and park-like setting.

But what of those common shapes and recurring images that are seen on memorial markers? Are there meanings behind them or are they simply pretty pictures? Well, it turns out that most of these designs do hold a symbolic significance, particularly on older stones. For example:

Obelisks:
This tall, pointy column is perhaps one of the most common monument styles seen in Victorian era cemeteries.  The Obelisk forms were derived from a period of revival in Egyptian art and associated with ancient greatness, patriotism, and elevated taste. Practically speaking, these memorial stones fit in relatively small spaces, and perhaps most importantly, obelisks were less costly than large and elaborately-sculpted monuments. The form was meant to represent rebirth and the spiritual connections between Heaven and Earth, life and the afterlife. 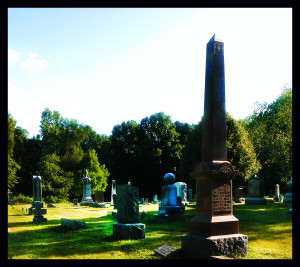 The obelisk is a common form of grave stone, particularly popular in the Victorian era. Union Chapel Cemetery, Lorentz.

Sea Life:
Fish, clam shells, scallop shells, and other types of shells were considered a symbol of a person’s Christian pilgrimage or journey through life.  In the middle ages, Christians wore a scallop shell to indicate that they were on a pilgrimage.  Placing a shell or a rock on a gravestone during a visit is an ancient custom that is still widely followed and may in fact have several different meanings, depending on the cultural background of the people placing the items.  The idea of crossing over a body of water to the promised land or crossing the River of Styx to the afterlife, the final journey to the “other side” is also part of the symbolism of the shell. 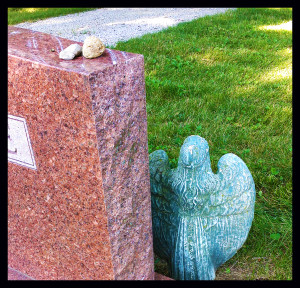 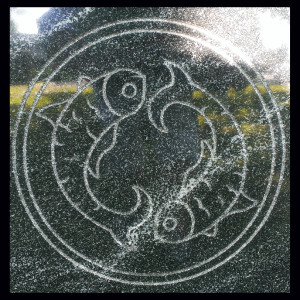 Nautical symbols can mean many things… including something as simple as the grave’s occupant was a Pisces. 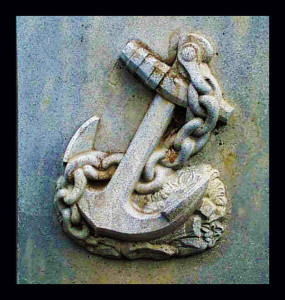 Nautical Motifs:
Carvings of  fish or anchors were typically used to symbolize hope and often served as a symbol for Christ as a “fisher of men.” In seaside areas, the anchor also symbolized seamanship and usually marked the grave of a dedicated sailor or a member of the Navy. Graven ships were often seen on cenotaphs of sailors lost at sea.

Hands:
Hands are a common motif found on many older gravestones had various meanings, depending on their position and gesture. A hand with an upward pointing finger signified the deceased has traveled upward to Heaven and is an indicator of a just and divine reward. Two clasped hands typically symbolized eternal love (often used for married couples) or a reunion in the afterlife. Hands folded in prayer indicate the deceased was a pious person in life. Hands pointing downward symbolized God pointing to mortality or sudden death.  Handshakes were farewells to earthly existence or declared friendship that would transcend mortality. 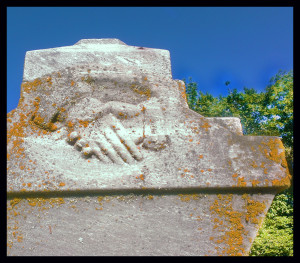 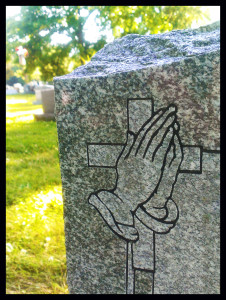 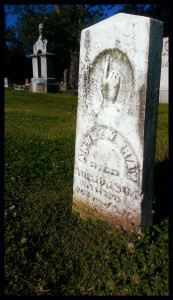 Some believe this signifies the hand of God pointing the way to heaven. Some see it as a tribute to a particularly righteous person. Union Chapel Cemetery. 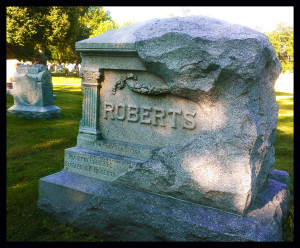 Architectural Elements:
Gates or a barred entrances were meant to depict the gates of Heaven — the arrival of the departed into the glorious realm of the divine. A column is usually representative of a man or woman’s life. A broken column depicted a person’s break with life or a young life cut short. The pyramid, fashioned after the colossal ancient Egyptian stone tombs, represented resurrection, eternal life, spiritual power, and enlightenment. Windows were symbolic of the spirit set free. 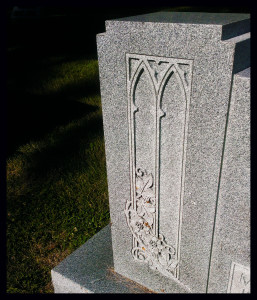 Images of Childhood:
Lambs, sleeping cherubs, child-like angels or images of children in repose were meant to represent purity and virtue — the innocence of children. These figures typically adorned the graves of infants and young children. (The lamb might also have been used to represent Christ the Redeemer, in the Christian religion.) Conversely, carvings of wheat tended to represent the “divine harvest” (the taking of humanity by God) and also symbolized a long and fruitful life enjoyed by the deceased. 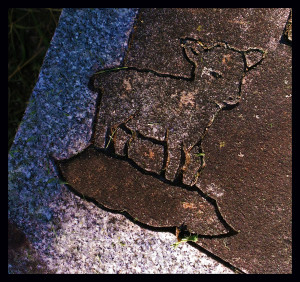 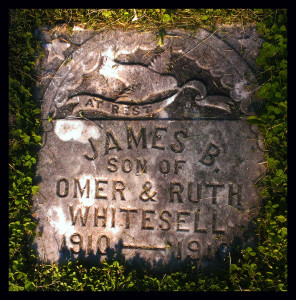 Birds:
Birds, especially in flight, depicted the soaring of the soul to the afterlife. Eagles were typically used to represent a military or American patriotic background. A dove symbolized the Holy Spirit or peace. The pelican represented sacrifice, sometimes acting as a symbol of Christ’s sacrifice, because of a medieval legend that featured a pelican piercing its own breast to feed its young. 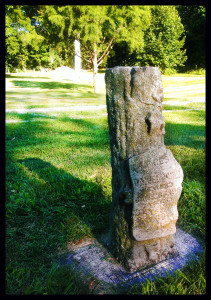 This “log” marker is difficult to read but may denote a member of the Woodsmen. Union Chapel Cemetery.

Log, Stump, Tree:
These symbols mark the graves of Woodmen of the World members, a fraternal group which was founded in 1883.  Woodmen were a progressive lot for their time, advertising themselves as an organization for the “Jew and Gentile, Catholic and Protestant, the agnostic and atheist.”  The Woodmen emblem is a sawed-off tree stump, often with a mallet or beetle, an ax, and a wedge. The motto “Dum, Tacet Clamat” (Though Silent He Speaks) sometimes appears near the border.  These emblems are found throughout the United States, but the largest concentration is in the South and Midwest. Broken braches on the tree indicate a life cut short. 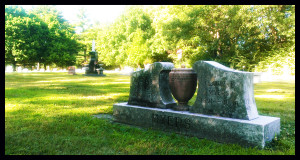 An urn to symbolize the soul (and to conveniently hold tribute flowers). Union Chapel Cemetery.

The Urn, Drapes:
More than a vase for funerary flowers, the urn is a symbol for death and release of the soul, stemming from ancient cremation rituals. The urn represented soul’s rebirth in the next realm. Often, an urn is draped with cloth, depicting death — the final partition separating the living world from that of the dead.

Of course, we’ve only scratched the surface, here. There are hundreds of fascinating, quirky, fun and even morbid gravestone symbols. If you simply cannot get enough, might we suggest a highly informative tour through Crown Hill Cemetery? Crown Hill typically holds public tours from June through early October on the second, third, and forth weekends of the month. During Saturday evening tours, visitors can admire the sunset from “the Crown”, Marion County’s highest hill, which offers a breathtaking 360-degree panoramic view of the city’s skyline. Call ahead (317-920-2644) for actual times and tour themes. 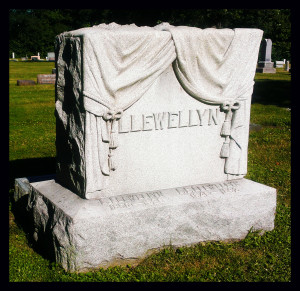 Draped cloth denoting that the interred has gone “beyond the veil.” Union Chapel Cemetery.

Tell us in the comment box:
Which is your favorite Indianapolis cemetery? 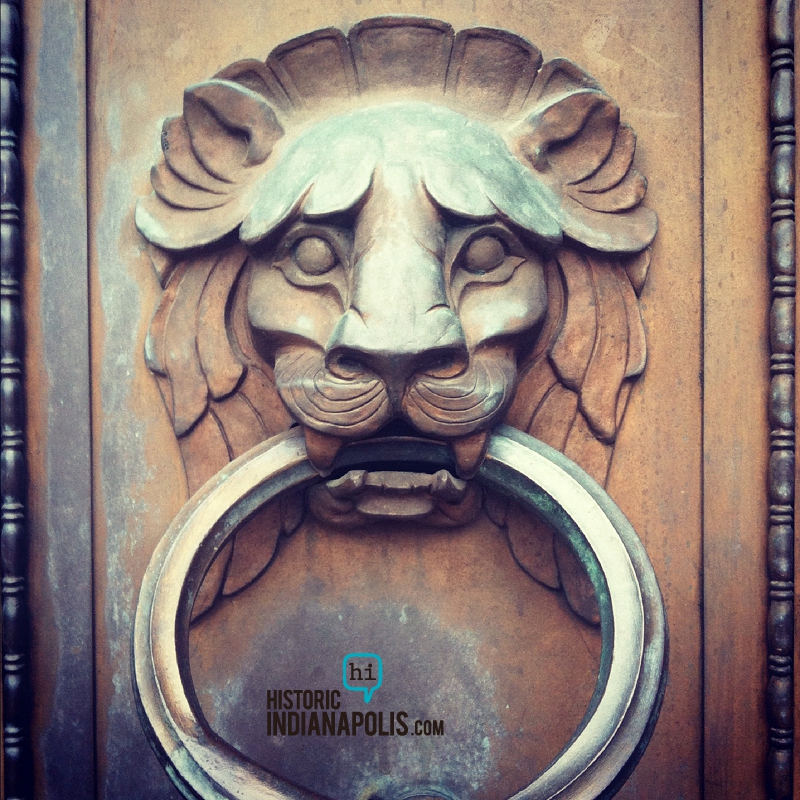