In late September, there was a spirited bidding war on ebay over an item that most people would consider a piece of trash. The lucky buyer who won the 100-year-old can of Van Camp’s Pork & Beans beat out four other bidders with a final bid of $37.50. Because I collect old “Libby’s” cans, I wasn’t surprised by the selling price or by the fact that there are at least other five people in the e-universe who are willing to pay good money for a rusty tin can. But I had to wonder where the tin can had been for the past 100 years.

Unlike Grandma’s china, the family Bible and other cherished heirlooms that are lovingly preserved for future generations, most antique advertising was meant to be used for a short period of time and then thrown away.   If you ever watch Antiques Roadshow, you’ve seen the stories about valuable posters that were used as insulation or painted trade signs that were stowed in an attic and forgotten for decades.  Here’s a news flash for buyers of expensive “collector edition” items – the reason that old advertising is valued on the collector market is because it was not produced for collectors.  Scarcity tends to increase value, which means you’re more likely to get a greater return from a vintage can of beans than from a vintage Collector Edition Beanie Baby.

Two weeks ago, I spent a fun and fascinating afternoon at the State Fairgrounds hunting for Indianapolis-related advertising. Indianapolis is a great place to live if you like old advertising, because it’s also the long-time home of the Indy Ad Show, one of the top antique advertising shows in the U.S. Even if you’re not a collector, you’ll be both amused and amazed by the colorful signs and store displays hawking everything from Alka Seltzer to Zero Bars. 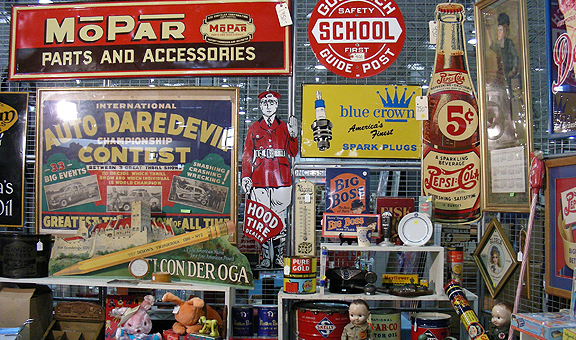 Most of the dealers at the Indy Ad Show are from out-of-state, so I didn’t expect to find any advertising for local hotels or restaurants. However, souvenirs that were carried home by visitors to Indianapolis occasionally crop up, including this pair of vases from the Hiawatha Room at the Hotel Kingston.  Little information is available about the hotel, which is listed in the 1916 city directory at 31-35 Monument Place. 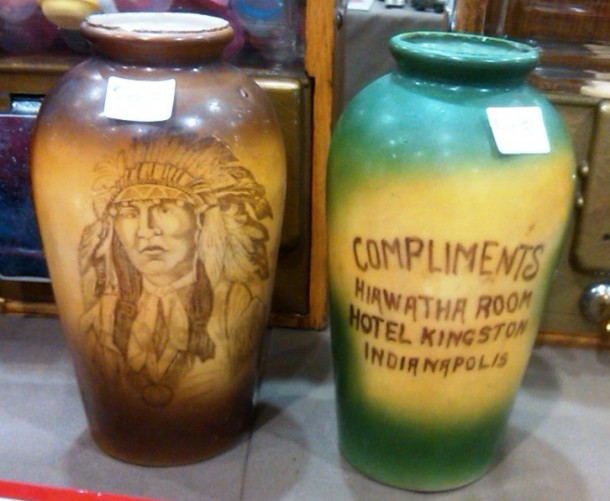 Although both vases featured the hotel's name on one side and a picture of Hiawatha on the other, the green vase was priced at $125 and the brown vase at $150.

I found a few examples of advertising for Indianapolis products that are no longer made, including a Holcomb & Hoke popcorn box.  James Holcomb and Fred Hoke brought the world its first taste of “movie popcorn” when they introduced their Butter Kist popcorn machines in 1913.  The Indianapolis-based company’s popcorn machines and peanut roasters were hugely popular in theatres, five-and-dime stores and other local businesses, but sales dwindled during the Great Depression and production ended in 1934. 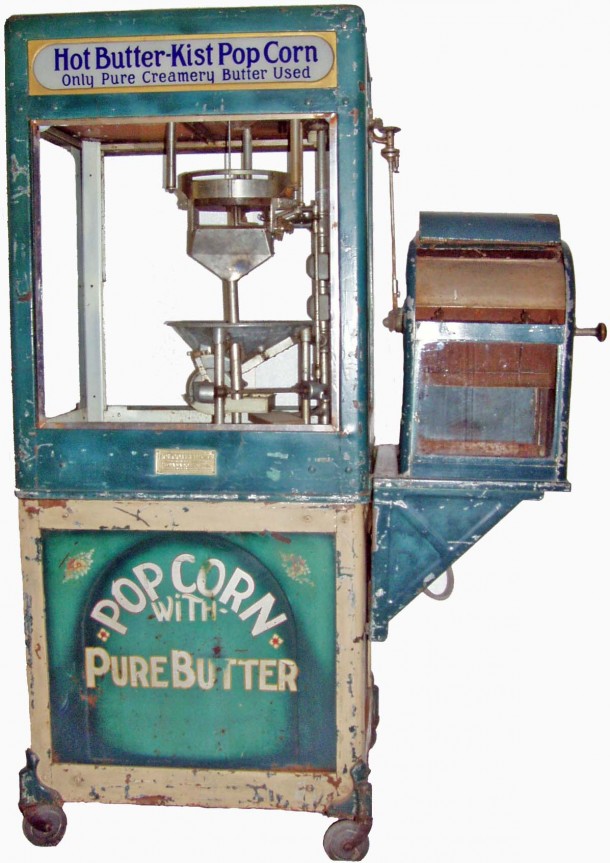 Some of the other advertising I found for Indianapolis products of the past include:

After wandering around the Indy Ad Show for about an hour, I finally found a poster that took me back to my Wonder Years.  Like most Hoosiers of a certain age, Wonder Bread was a staple of my childhood diet.  Fried bologna on Wonder Bread.  Peanut butter on Wonder Bread. Thanksgiving turkey with Wonder Bread stuffing.  But it wasn’t just a white bread existence, because Wonder Bread occasionally took an international twist at our house, doused with garlic butter on Italian spaghetti nights or soaked with eggs for French toast. 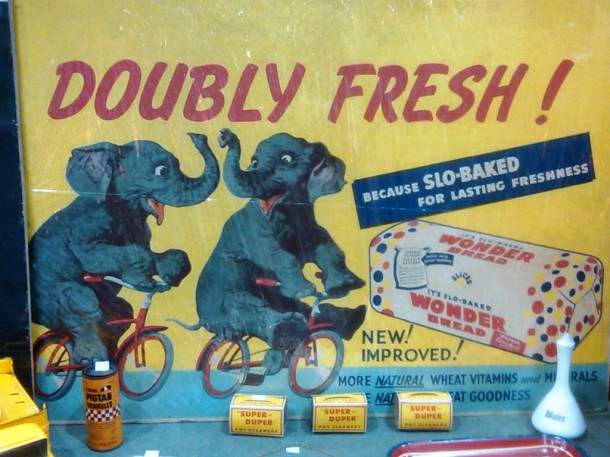 In 1883, Alexander Taggart partnered with B.E. Parrott to establish a bakery on the corner of Georgia and Pennsylvania streets. After the Parrott & Taggart Bakery became a local branch of the National Biscuit Company, Taggart struck out on his own, opening the largest bread bakery in the state at 18-28 New Jersey, as well as nine retail stores in Indianapolis. The photo on the far right is a view of the City Market on market day, with Taggart Baking in the background.

Indianapolis’ inventiveness is also responsible for the ubiquitous casserole of baked beans that graces every barbecue and pitch-in throughout the U.S.   Gilbert Van Camp and his wife, Hester, began a canning business in 1861 from their small grocery on Missouri Street.  The company grew over the years, boosted by a lucrative contract to supply provisions to the Union Army, but business really exploded in the 1890s after Van Camp began adding tomato sauce to its canned pork and beans. The origin of this flavorful combination is a classic tomato-tomahto tale — some sources claim it was Hester’s idea while others attribute the recipe to Gilbert’s son, Frank. In one version of the story, Frank created the recipe after adding some Van Camp’s catsup to a can of pork and beans; in another version, Frank was eating lunch in the warehouse and the flavorful combination happened by accident when a tomato fell into his bowl of pork and beans. Regardless of the origin, an aggressive advertising campaign in the 1890s helped change the nation’s taste in pork and beans from a molasses-based sauce to the tomato-bean combo.

Gilbert Van Camp died in 1900, but the company continued to flourish under Frank’s leadership, eventually expanding into canned milk.  A dealer at the Indy Ad Show offered the poster, below, for $225. 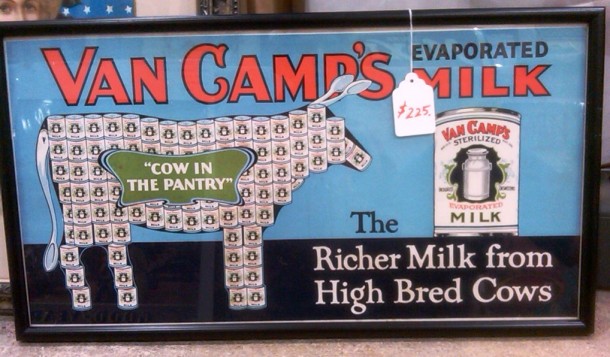 Van Camp Packing Company fell on hard times during the Great Depression, and in 1933 merged with Stokely Brothers, a Tennessee canning firm established in 1898.  Stokely-Van Camp became the official company name during WWII, when the cannery developed the infamous Army “C” rations at its Indianapolis flagship plant at 2002 South East Street.  In 1984, Stokely-Van Camp was acquired by food giant Quaker Oats, and after a series of changes, the Indianapolis plant closed around the turn of the 21st Century.

As interest in local food continues to grow, I encourage you to celebrate Indy’s culinary heritage with a delicious baked bean sandwich on Wonder Bread.  While I prefer the basic beans-on-bread combo, here’s a link to a baked bean sandwich recipe from 1943 that’s fancy enough to serve guests.

The Indy Ad Show is held twice yearly at the Indiana State Fairgrounds. The next show is scheduled for March 17, 2012.