A close up view of “The Dying Solider” on the east side of the Solider’s and Sailor’s Monument.

Every day, thousands of people pass the Soliders’ and Sailors’ Monument at the heart of downtown Indianapolis. It stands in remembrance and honor of the scores of Hoosiers who fought in the war between North and South. Did you know, however, that the man responsible for the grand scenes depicted in Indiana Limestone was a fresh art school grad from Vienna, Austria who was born a year after General Robert E. Lee surrendered at Appomattox? 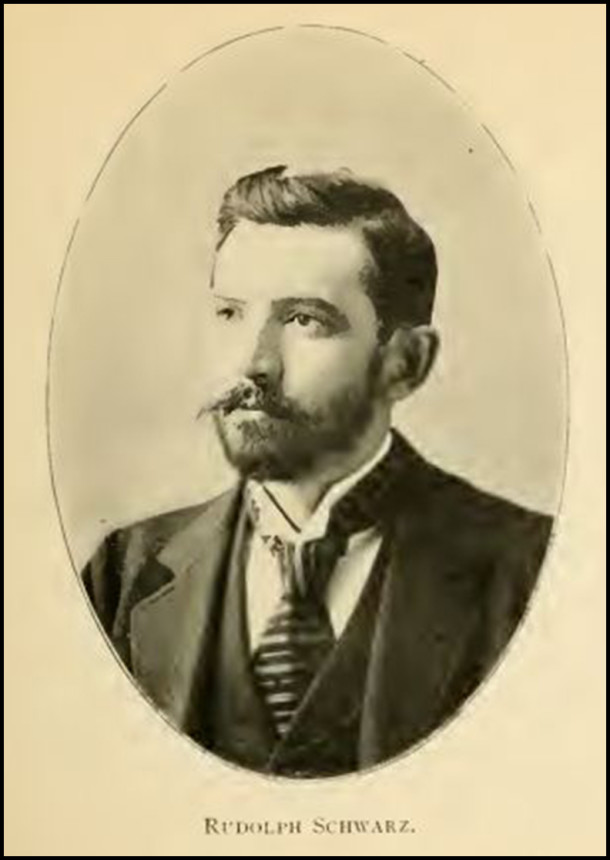 Rudolph Schwarz was born in Vienna, Austria in 1866 to a family that was not particularly thrilled with his desire to study art. Said Schwarz “It requies some nerve for a young man to choose art as a career. An artist sometimes does not know how to meet the problems that come up. He must have the greatest conceivable amount of patience if he wishes to achieve success. Art as well as any other work takes perseverance.” He persevered and gained entrance to the prestigious Imperial Academy of Art in Vienna, the same school that would deny a young Adolf Hitler entrance a few decades later. While at the Academy of Art, Schwarz encountered sculptor Karl Bitter whom introduced the young artist to stone carving. Schwarz would study under sculptors Gustav Eberlein, Nicolaus Geiger and architect Bruno Schmitz, the later of whom would change the course of Schwarz’s life. 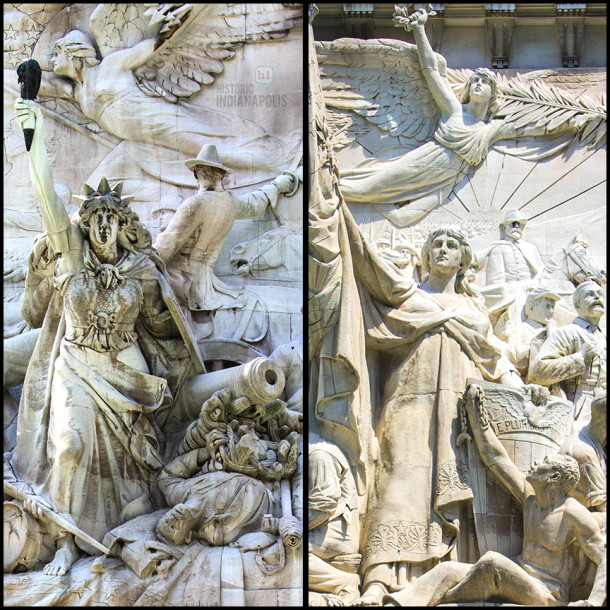 Scwarz’s major works on the Soliders’ and Sailors’ Monument. Left: “War” on the monument’s east side. Right: “Peace” on its west side.

In 1887, when the Indiana General Assembly passed a bill to form a commission in charge of building a monument to Indiana’s Civil War veterans, notices were placed in newspapers across the world to design that monument. Schmitz’s submission called Symbol of Indiana was unanimously selected and in January of 1889, he arrived in Indianapolis with Rudolph Schwarz in tow. 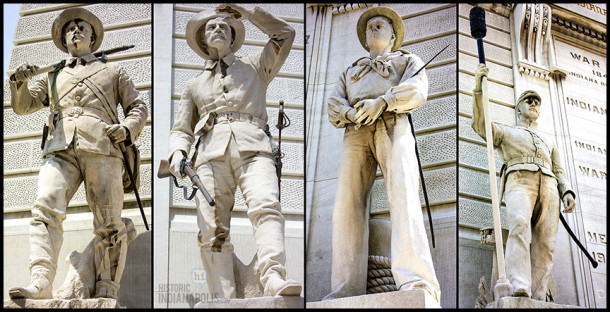 From the left: The Calvaryman and Infantryman flank the south entrance of the monument while the Sailor and Artilleryman guard the north.

Supervising architect Schmitz tasked the young sculptor with the ambitious assignment of ornamenting the stone obelisk with dynamic scenes commemorating the trials and sacrifices of Hoosiers in the War Between the States. Additionally, Schmitz assigned Geiger and American sculptor George Brewster to create the three bronze astragals that surround the rising tower. Brewster would also design the recently restored Victory statue on the monument’s crown. 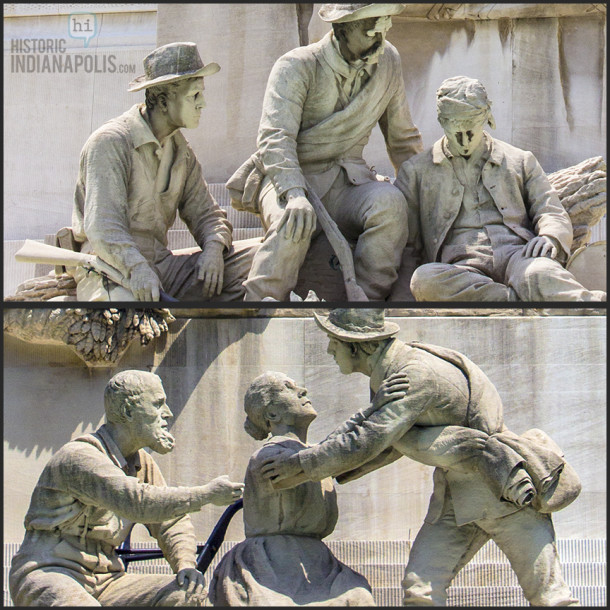 Schwarz set up shop in a studio, dug into the ground, at 910 East Raymond Street on Indianapolis’ south side. From his 1912 obituary in the Indianapolis Star:

“If an interviewer went to his secluded studio he would be greeted by a tall, broad-shouldered man, in clothes smeared with clay, and smoking a cob pipe. If the visitor asked this man to be directed to Mr. Schwarz, he would reply simply and directly: ‘I’m Schwarz,’ and take any amount of time explaining the mysterious looking groups and figures that stood here and there about the room. There the sculptor worked each afternoon, assisted by his model, whom he dressed in costumes appropriate to the figure he was designing, that every detail might be copied.”

The crumbling Schwarz sculpture and portrait of Turnvater Friedrich Ludvig Jahn (father of the German gymnastic movement) on the west side of the Southside Turnverein.

Schwarz immediately settled in Indianapolis, married and grew a family, though art would most occupy his time. He was commissioned to produce a sculpture to adorn the Vonnegut and Bohn designed Southside Turnverein building at 306 Prospect Street–now the Madison Avenue Athletic Club.

The 1904 Albertina Forrest memorial in Crown Hill Cemetery with bronze sculpture by Schwarz.

He designed the “Woman in Repose” bronze statue that adorns the Albertina Forrest memorial in Crown Hill Cemetery. 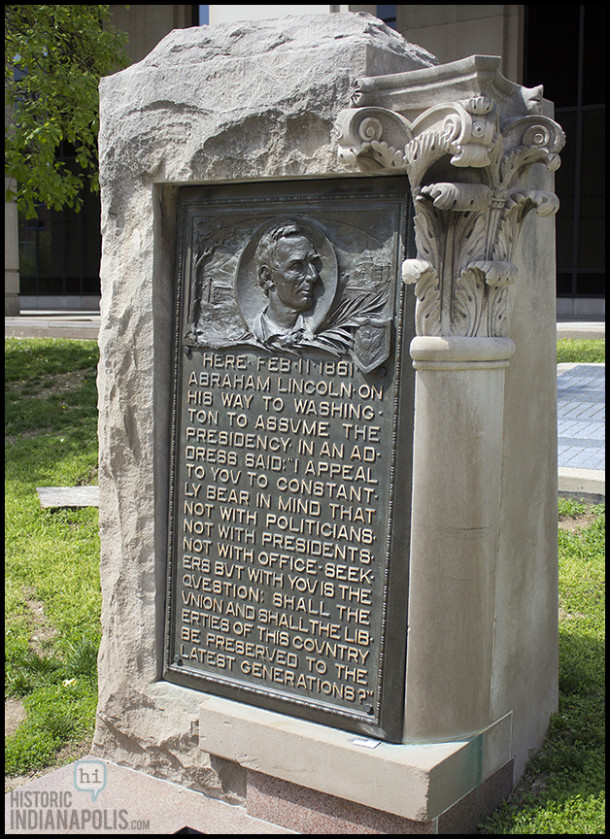 Memorial marking the location from which Abraham Lincoln spoke on his way to Washington D.C. to assume the presidency in 1861, on west Washington Street near West Street.

What else might you recognize? The memorial on west Washington Street, just east of the Eiteljorg Museum, commemorating the location where newly elected President Abraham Lincoln spoke to Hoosiers on his way to Washington D.C. in 1861.

One of Schwarz’s few distractions from his south side studio was the seven years he spent teaching sculpture at the John Herron School of Art, originally out of the home of artist T.C. Steele. Vonnegut and Bohn designed the building at 16th and Pennsylvania Streets. Schwarz’s mark on the building, that now houses Herron High School, can still be seen as his portrait medallions of Peter Paul Rubens, Leonardo da Vinci, Albrecht Durer, Michelangelo and Diego Velasquez overlook passers-by. 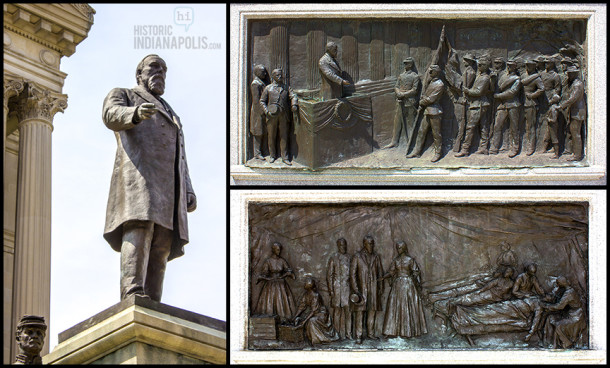 Schwarz’s other prominent downtown commission came in 1907, when he was selected to create a statue honoring Indiana’s Civil War governor Oliver P. Morton. The monument, for which Morton’s assistant, Colonel W. R. Holloway, modeled, stands in front of the Indiana Statehouse flanked by friezes representing his wartime service, looking down Market Street towards the monument that brought Schwarz to town.

Schwarz had the market cornered as far as Indiana Soldiers’ and Sailors’ monuments goes, but he also designed monuments in South Bend, Crawfordsville, Mount Vernon, Terre Haute, Princeton and Vincennes. He died nearly penniless on April 14, 1912 and was cremated. Schwarz’s art school friend Karl Bitter, by then a prominent sculptor in New York City, arrived to ensure that the widow and children of his old friend were taken care of.

Forty-six years later, Indianapolis would again know the name and good work of Karl Bitter, but that is a story for another day.